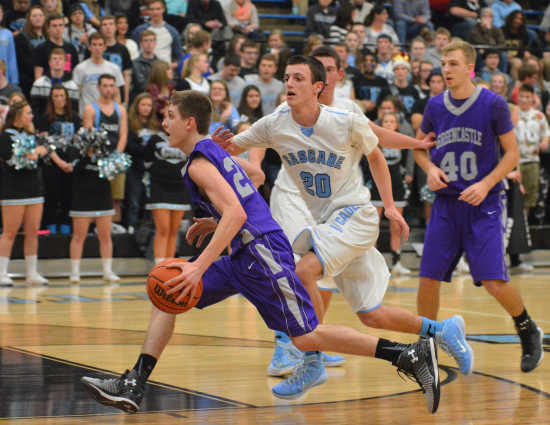 CLAYTON--Looking to stay in contention in the race for the WCC boys' basketball crown, Greencastle traveled to Cascade looking to run its conference record to 2-1 Friday night.

In a sluggish contest, both teams struggled to find offensive rhythm yet the night finished with bang when Schuyler Hart nailed a three with nine seconds left to hand the Cadets a 36-35 win.

"We couldn't put the ball in the hole," Greenlee said. "We were 1-for-10 from three-point range, couldn't get anything going offensively and just couldn't get any kind of rhythm or flow going.

"We were good enough defensively to win. The last couple of games, though, we've been stagnant, haven't moved very well and when you play a team that's tough to score on, you have to make plays when you have them and we didn't do that tonight."

Hart opened the game with a three as part of a 6-0 run for the hosts, answered by a personal 6-0 run by Greencastle's Colyn Foxx that helped propel the Tiger Cubs to an 11-10 lead after the first quarter.

Both teams struggled mightily in the second quarter as only nine total points were scored as the teams headed into halftime tied at 15-15.

Part of the visitors' struggles revolved around Brody Bollman's absence with two early fouls and Greenlee said his early departure threw the offense off schedule.

"Anytime we lose Brody it's difficult for us because he does so much for us on both ends of the floor," Greenlee pointed out. "We lean on him a lot and even though we were tied at halftime, having him out that long in the first half was difficult to overcome throughout the game.

"I thought the guys battled hard and never questioned their effort. It's just that, sometimes, we think things are going to come easily on offense and they don't, so we have to figure out better ways to move offensively."

Greencastle scored nine of the first 11 points in the third quarter but could only add one more point to its tally, allowing Cascade to tie the game at 25-25 entering the final period.

The two teams traded points as the fourth quarter went along and Bollman put the Tiger Cubs ahead by two with a pair of free throws with 0:30 to play.

That left enough time for Hart to be the hero for the Cadets. The loss [aired with Cloverdale's Friday win over North Putnam, knocks Greencastle out of WCC title contention.

Greenlee said the offense was more aggressive in the second half but failed to make Cascade get out of position on defense.

"Since shots weren't falling, we tried to get to the basket more and Brody posted up inside," Greenlee noted. "The reason we were struggling is because we didn't move the ball, reverse the ball and get the defense shifted.

"We were trying to do things against a defense that was already set. I think if we had moved them a little more, we could have gotten some of the opportunities to get us a lead."

Greenlee said that the team needed to relax in order to get its offense back on track.

"We need to have fun again," Greenlee said. "We need to find some ways to play a little looser because we're so tight offensively and we're worried about every shot going in.

"As an offensive player, you can't do that, you just have to play. Hopefully, we can figure something out for tomorrow night."