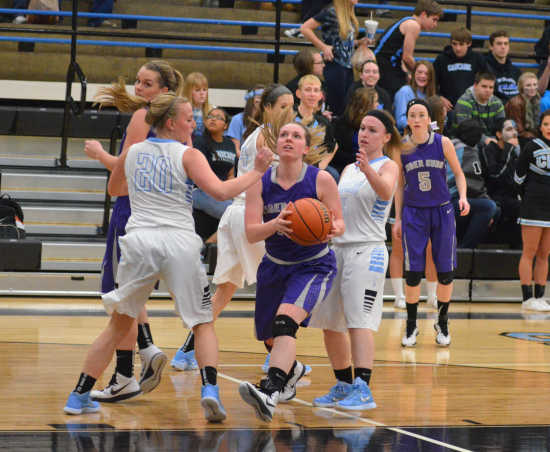 Senior Callan Taylor, of Greencastle, goes up for two in the game at Cascade. (Banner Graphic/TRENT SCOTT)

CLAYTON -- The two unbeaten WCC girls' basketball teams squared off Friday night, as Cascade welcomed Greencastle in a match-up that decided the destination of the conference title.

An 11-point Tiger Cub lead late in the fourth quarter was nearly squandered before late free throws helped the visitors seal the deal on a 46-39 win.

Greencastle head coach Bradley Key said the team kept Cascade under wraps for the most part. 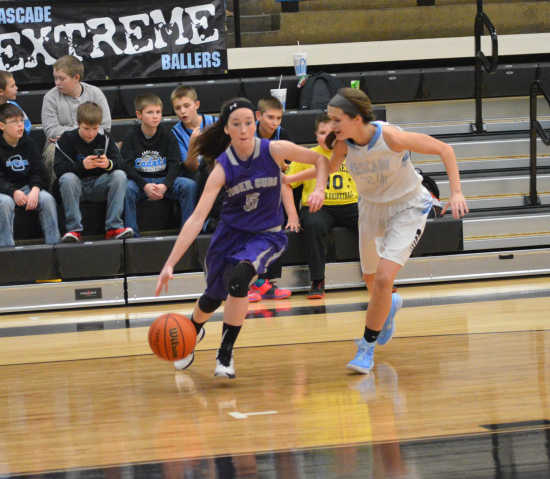 Bethanie Burgeson, of Greencastle drives the baseline to get a shot off. (Banner Graphic/TRENT SCOTT)

"I'm really proud of my girls," Key said. "We knew coming in here was not going to be easy because it's a tough place to play and year in and year out, Cascade has a really solid team.

"They've got shooters you have to find and they like to run, which is really hard to defend, honestly. I thought our girls did a really good job of knowing the scouting report and where people were going to be at."

In a cagey opening quarter, Greencastle took control with a 9-0 run that gave the visitors a 12-2 lead and a 12-4 advantage at the end of the period. 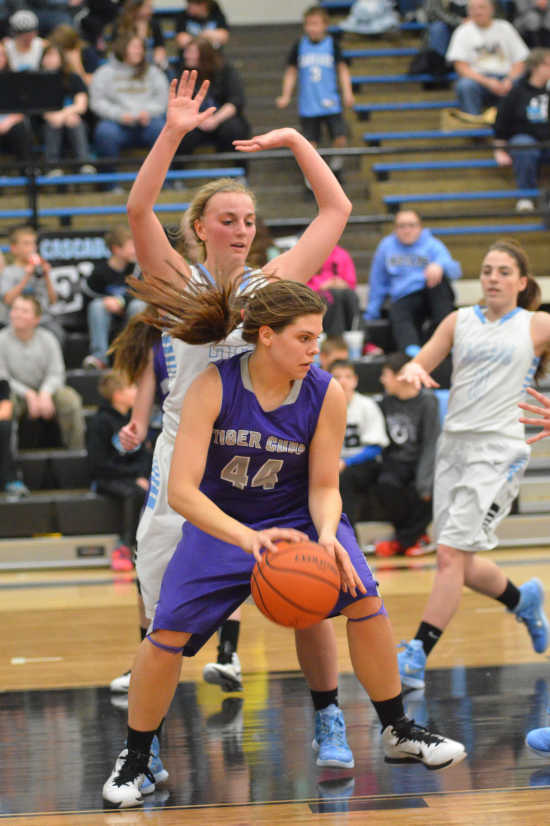 Cascade opened up offensively, knocking down four threes in the second quarter, including a pair when trailing by 10, to close the gap with the Tiger Cubs to 25-21 at halftime.

Key said the defense was strong in the opening minutes but the hosts eventually found some holes.

"I thought we had pretty good defense at the beginning because we were pumped up and focused," Key said. "At the end, Cascade's a good team and they found out what we were doing, moved the ball and knocked down some shots.

"We had some silly turnovers in big games that we can't have. I thought we gathered ourselves when things got tight and made the right plays."

The Cadets cut the halftime lead to one with a three to open the second half but Greencastle responded with a 7-0 run to stretch the lead back to eight.

After a Cascade three cut the lead to five, Callan Taylor was fouled with 0.1 left on the clock, nailing three free throws to push the lead back to eight heading into the fourth quarter.

The Tiger Cubs led 40-29 with 2:58 to play when Cascade made a late rally, running off 10-straight points to cut the lead, partially aided by Taylor missing the front end of three one-and-ones.

However, the Cadets could not take the lead when given the chance, turning the ball over on their final four possessions while Taylor and Mia Stevens combined to go 6-of-6 from the line in the final minute to ice the contest and give Greencastle at least a share of the WCC title.

Despite the late misses, Key said the right player was at the line taking the big shots.

"We did shoot well at the free throw line, although it didn't feel like it because we missed the front end of the one-and-ones, but we had the right person shooting them in Callan Taylor," Key said. "We ask a lot of her and she played great tonight."

Key also pointed to the girls being able to move in and out as necessary as part of the Tiger Cubs' success.

"I really like our rotation as we're able to play eight girls," Key noted. "At the end, we went with the flow and I thought Allison White played an amazing game and had an enormous steal at the end of the game.

"Mia Stevens, as a sophomore, has gained a lot of experience in the last two weeks and I thought she played great tonight in a big, big game."

Greencastle hosts Western Boone Saturday as part of a doubleheader, a game Key said will be similar to a sectional final in terms of preparation time.

"This is a great week to simulate what sectional is like," Key pointed out. "We have Tuesday, Friday and Saturday games and you have to win to get to the next one.

"Western Boone is great competition and it's going to be a challenge," Key added. "We haven't looked at them a lot because we were focused on tonight, but we'll have a walkthrough (Saturday) and see what we can do to get another win."