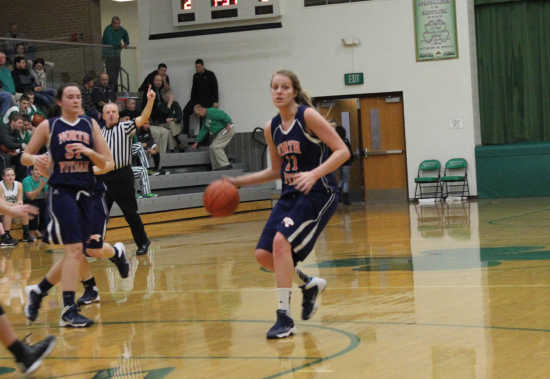 CLOVERDALE--The Clovers held homecoming Friday night and the girls' basketball team hoped to keep the crowd happy, but the Cougars had other plans. The North Putnam spoiled Cloverdale's hopes 38-33.

North Putnam started the game up 10-2, but Clover (7-11 0-3 WCC) senior Laura Worthington hit a last-second three to cut the lead to five at the end of the first quarter.

Cougar (3-10 1-1 WCC) sophomore Emilie Henninger had of her three and-ones with 5:41 remaining in the half and she converted. She had 14 points, three rebounds, three assists and eight steals. 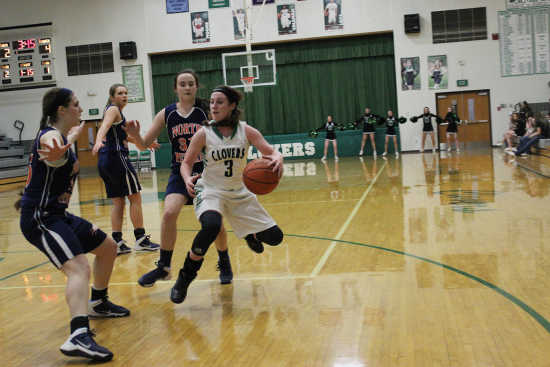 "We just gelled really well," Henninger said. "It was a game we didn't want to lose."

"Give credit to coach Spencer," Clovers' coach Matthew Langdon said. "His zone is really good. They have some length and they spread that two-three zone. They don't allow many openings."

Five straight turnovers between both teams ended the first half with the score being in favor of the Cougars, 17-10.

North Putnam opened the second half on an 8-3 run. Henninger had another steal and a lay in and Taylor Nauert had four of her 14 points.

"We did a really good job following scout," Cougars' coach Jim Spencer said. "We did good on both sides of the ball. They really improved tonight."

The Clovers rallied back with eight straight points to cut the lead to four going into the fourth. Senior Bailee Stevens led the surge with five of her 10 points.

North Putnam had several opportunities to pull away, but they missed seven straight lay ups.

Going down the final four minutes was a stressful task for players and spectators.

With two minutes remaining, Stevens hit a big three-pointer to cut the lead to three, 31-28.

Stevens was leading the Clovers to a comeback, but only three seconds after her three-pointer she fouled out.

"In games, Bailee is a really hard worker," Langdon said. "A couple early fouls hurt her, but she worked hard."

In the final 90 seconds Henninger had two and-ones off of steals and she made one of the free throws.

"We broke down the press," Henninger said. "They mainly fouled with their bodies so I was able to get up and lay it in."

"Henninger did a tremendous job for us tonight," Spencer said. "She had eight steals and 14 points and she made some big plays for us. She looked really good tonight."

After three made free throws by junior Haley Hamm and a basket by Angela Pieper, the Clovers cut the lead to three with 12 seconds left. They sent Nauert to the free throw line with a one-and-one scenario. She made both to seal the game.

"I thought we had some good performances from some girls," Langdon said. "Especially from Haley Hamm. I thought she made a big step to being a better player."

Spencer was especially happy with his team playing four full quarters, especially after having three disastrous second halves in the last four games.

"We put together four good quarters," Spencer said. "We blocked off and did a good job getting back. We made some shots and got some offensive rebounds and overall we just got better and rebounded nicely."

Cloverdale's next game will be January 26 against South Vermillion at home.

North Putnam's next game will be January 27 against Turkey Run at home.