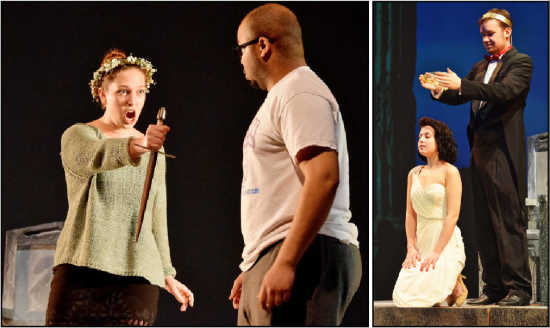 Addy Sterrett (above, left) and Yazid Pierce Gray rehearse a scene from Act I of the DePauw Opera production of "The Coronation of Poppea," while Joseph Leppeck (above, right) and Hannah Gauthier rehearse the coronation scene from Act II. Guest directed by Joachim Schamberger and conducted by Orcenith Smith, the opera opens Thursday and runs for four performances (Feb. 5-8) at the Green Center for the Performing Arts. (Courtesy Photos)

Written in 1643 for the Venetian carnival season, Claudio Monteverdi's last work, "The Coronation of Poppea," is a cautionary tale about the consequences of ambition. This week, the DePauw University School of Music will present Raymond Leppard's sumptuous edition of the early Italian opera in four performances, Feb. 5-8, in Moore Theatre at the Green Center for the Performing Arts.

Like last year's DePauw update of Mozart's "The Secret Gardener," guest director and virtual scenic designer Joachim Schamberger has turned the clock forward to place Monteverdi's 17th-century work in the present and utilized dramatic projections to create the set. This year's production takes place, however, not in Greencastle but in Rome -- during the first century A.D.

"One especially interesting aspect of this production," DePauw voice professor Kerry Jennings said, "is the juxtaposition of Joachim's ancient Roman set and media design with the contemporary costume designs by Caroline Good."

Many of the costumes, particularly the goddesses, give a nod to the original time period, but the pairing of present-day and ancient times underscores the fact that the conflicts and issues in this nearly 375- year-old opera -- adultery, ruthlessness, greed, etc. -- still continue to bring about destruction.

Another exciting aspect of staging "The Coronation of Poppea," according to Jennings, is that it gives vocal students the opportunity to have a very real experience singing with continuo, the improvised style of accompaniment typical of Baroque music.

"For some of them it has been their first time singing with harpsichord," Jennings said, "and certainly none of them have sung with continuo to the extent that is called for in this opera. With the help of our coaches and Professor Orcenith Smith, they have all met the challenges and are experiencing the rewards that this wonderfully expressive work affords them and our audiences."

Music director Orcenith Smith will conduct the DePauw Opera Orchestra in this fully staged, double-cast production, which will be sung in English.

The role of Poppea will be performed on alternate nights by sopranos Hannah Gauthier (Th/Sat) and Julie Strauser (Fri/Sun), and Emperor Nero will be sung by tenors Joseph Leppek (Th/Sat) and Lance Orta (Fri/Sun). Mezzo-soprano Shannon Barry (Th/Sat) and soprano Addy Sterrett (Fri/Sun) will sing the part of the Empress Ottavia, and baritones Logan Dell'Acqua (Th/Sat) and Yazid Pierce-Gray (Fri/Sun) will share the role of the noble Ottone.

General admission tickets for the opera are $7 and are available online at www.depauw.edu/music/tickets. Tickets for seniors, children and all students are free. Performances on Thursday through Saturday night begin at 7:30 with the Sunday matinee starting at 2 p.m.

For additional information or assistance, persons may stop by the Green Center box office, 605 S. College Ave., or call 658-4827.