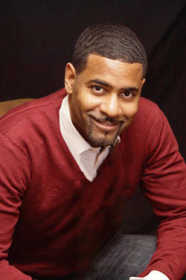 The following morning, Friday, Feb. 6, Moss will be preach at a special 10:30 chapel service at Gobin. Title of that address is "#blacklivesmatter."

After the service a light lunch will be served.

Both events are free and open to the public.

Rev. Moss is part of a new generation of ministers committed to preaching prophetically that the message of love and justice are inseparable companions, forming the foundation of the Gospel of Jesus Christ. He has a unique gift to communicate across generations and is a popular speaker on college campuses, at conferences, and in churches across the globe.

A native of Cleveland, Moss is an honors graduate of Morehouse College and Yale Divinity School, and earned a Doctor of Ministry degree from Chicago Theological Seminary.

Moss is highly influenced by the works of Zora Neale Hurston, August Wilson, Howard Thurman and jazz and hip-hop music. He published his first book, "Redemption in a Red Light District," in 1999, and co-authored "The Gospel Re-Mix; How to Reach the Hip-Hop Generation" in 2006. In 2012, he published, with his father, The Rev. Dr. Otis Moss Jr., "Preach!: The Power and Purpose Behind Our Praise."

Moss published his collection of sermons, "The Gospel According to The Wiz and Other Sermons from Cinema," in 2014. His sermons, articles and poetry have appeared in a number of publications.

He is an ordained minister in the Progressive National Baptist Convention and the United Church of Christ, carrying dual standing in both denominations. He is a life member of the Progressive National Baptist Convention, board member of the Christian Century magazine, and chaplain of the Children's Defense Fund's Samuel DeWitt Proctor Child Advocacy Conference.

Although Mendenhall was a pastor in the North Indiana Annual Conference of what was then called the Methodist Episcopal Church, one of the parents of the United Methodist Church, he explicity dictated that lectures be selected without regard to denominational divisions. The endowment has allowed DePauw to bring theological and religious scholars of international repute to campus for a century.