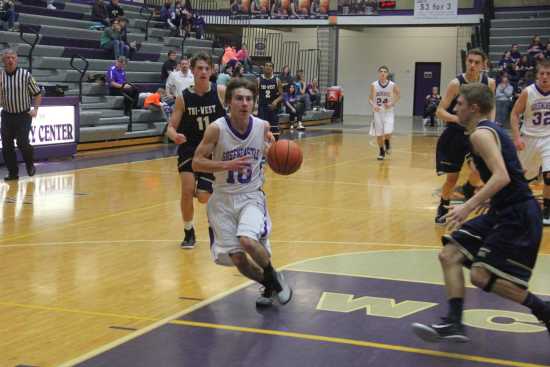 Greencastle senior Anthony Mitchell drives into the lave for an attempt at the basket. (Banner Graphic/JAY LOCKETT)
Order this photo

Another poor shooting night from the Greencastle boys' basketball team led to a home loss against Tri-West Saturday.

The defenses of both teams were the story early and both teams had trouble finding the net.

Other than a bucket from senior Anthony Mitchell, a three by freshman Colin York and a foul shot from senior Brody Bollman, GHS had a tough time scoring.

"Defensively in the first half I thought we were very good," Greencastle coach Troy Greenlee said. "The problem again was we couldn't but the ball in the basket. We got good looks. We had good opportunities we just couldn't take advantage of the shots we had."

After scoring eight in the first quarter, Tri-West managed 11 points in the second to take a seven-point lead at halftime. The Tiger Cubs again only scored six with four from Bollman and two from an unusually quiet Ryan Coble. The junior only scored once.

In the third, Tri-West had its best quarter offensively while GHS had its worst. The Bruins outscored the Tiger Cubs 20-5 in the third.

"I thought in the third, we kind of got away from what we wanted to do," Greenlee said. "We allowed their pressure to influence us a little. We were kind of unraveled in the third quarter. That when the lead got to where it was."

Going into the fourth down 39-17, Greencastle improved offensively. York gave them two threes and a bucket and Bollman again scored four.

"Part of it is our scorers have to understand that teams are guarding them differently," Greenlee said. "They are not going to let them catch and shoot it. They are not going to let them drive to the basket. They are making it hard on them. It's our job as coaches to find different ways to get them the ball. They have to understand to get open it is hard."

They play at Monrovia on Thursday Feb. 5 and Brown County on Saturday Feb. 7.