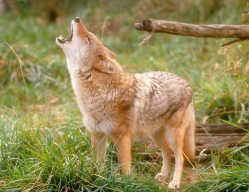 With a layer of freshly fallen snow glistening under a full moon, a rural Greencastle man sent his shivering dog out into the cold one last time on a recent frigid February night.

The mutt pawed at the ground and sniffed at the snow, contently seeking out a familiar spot in the yard to take care of whatever business had sent him outside in the middle of the night to begin with.

But about 50 feet away, in the shadow of a neighbor's garage, sudden movement caught the eye of both dog and master.

Too big for a cat, too ugly for a pet, the critter froze as the dog rose up on its hind legs.

"I scooped together some snow," the man said, "and tossed a snowball in its direction, figuring to scare off what I thought was a neighbor's cat."

Instead, what he saw trot away, illuminated under a nearby dusk-to-dawn light, was unmistakably a coyote, he said.

"Damn straight, it was a coyote," he said, preferring to remain anonymous after sharing his story.

While such a sighting has to be disconcerting to affected individuals -- especially considering we're not that far removed from most of us only envisioning a coyote as a cartoon figure getting an Acme anvil dropped on his head -- the spotting of coyotes in the Greencastle area has become more and more frequent.

Officer Ed Wilson found the animal taking its last breaths in the roadway, identified it as a coyote and let the Street Department dispose of it when neither animal control nor an Indiana Conservation officer was able to get to the scene.

That's about the same time that Northwood Addition resident Mike Murphy was taking note of an almost epidemic of missing cats (including his own) and small dogs in the neighborhood, and eventually saw a coyote saunter across Shadowlawn Avenue on his way to work.

Greencastle, of course, is not alone in experiencing these increased encounters with coyotes. Sightings have become all too frequent in not only Greencastle and Putnam County but across Indiana.

"It's not uncommon for coyotes to enter a populated area and live, and live well," area Conservation Officer Max Winchell told the Banner Graphic earlier, agreeing that coyotes do indeed tend to prey on cats and small dogs.

"They tend to adapt to whatever food source is available," he added, indicating much of the animal's activity is unseen by humans because coyotes are nocturnal and tend to prowl when for the most part, people are tucked in bed for the night.

While coyotes tend to hunt in pairs, one of the issues in Indiana, conservation officials say, is that coyotes have no natural predators here, other than man.

In an effort to minimize conflict with coyotes, the DNR has a list of facts and tips:

-- Studies have found coyotes in urban areas have the same general needs as coyotes in rural areas. Human-supplied food items such as household garbage, as well as domestic animals and pet food, have become part of their diet.

-- Coyotes breed in January and February, and pups are born in a den during March or April. A litter can be as few as one pup or exceed 10, with the average around five.

-- Small, undisturbed green spaces are all coyotes need for a den site. A typical den is created underground with a pie-sized entry opening into a larger area.

-- Coyote breeding pairs often establish a territory and defend it from other coyotes. Occasionally, yearling coyotes will remain with the breeding pair and new pups.

-- Urban conflicts are most often focused on attacks on pets, concerns for safety and fear of the unknown.

Coyotes are now considered a native species common to all Indiana counties (as well as every state in the union), including urban and suburban areas.

The coyote closely resembles a German shepherd dog in size and conformation, but carries its tail below lower than its back instead of curved upward. Coyotes have bushy tails and long, slender snouts, pointed ears and comparatively long legs.

The coyote's upper body is a grizzled gray or buff, with a reddish brown or gray muzzle. It lower body is white, cream-colored or reddish yellow.

Coyotes are basically rather large members of the dog family. Their weight ranges from 20 to 50 pounds, and they measure from 40 to 50 inches long from their nose to the tip of their tail.

The average coyote in Indiana weighs about 30 pounds, and males are frequently heavier than females.

Focusing on the current coyote issue, the Department of Natural Resources Division of Fish & Wildlife has slated a series of programs on coyote biology and how to deal with coyotes in urban areas at three locations.

The free programs are set for: