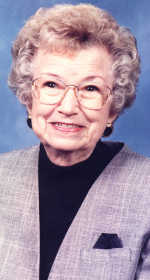 She married George Kent Thompson on Dec. 31, 1935 at Indianapolis, and later married Milbert Wayne Leaton on Sept. 26, 1969 at Tuscola, Ill.

Edwina was a homemaker, had worked at P.R. Mallory and as a manager for the Miller Jones Shoe Store.

She was a member of the First Christian Church of Brazil, Ind.

The family will receive friends on Thursday from 11 a.m. until time of service at the funeral home.

Memorial contributions may be made in memory to Horizon Hospice Care Inc., 252 Meadow Drive Suite 6, Danville, IN 46122.