By LAUREN BOUCHER For the Banner Graphic 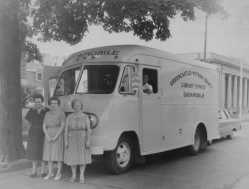 The mobile version of the library has taken a number of forms over the years, including the second edition of the Bookmobile (right), with Luvanne Stafford, librarian Sylvia Taylor and Bookmobile librarian Ethel Sears standing proudly in front in 1964.

In an effort to improve its outreach services, the Putnam County Public Library will be ending its Bookmobile service effective March 1. In doing so, however, the library will launch a delivery service, which will be more personalized for those who cannot make it to the library.

Library Director Grier Carson stated that with the end of the Bookmobile patrons will soon be able to, through the library's website, browse its catalog and place holds on items they would like delivered.

"We'll probably start by using the existing Bookmobile stops as drop off and pickup locations," Carson said. "Once we figure out where we are with our materials delivery program, we'll probably expand the drop off points or we will modify it so we are reaching the people who need it the most. That's what the Bookmobile is 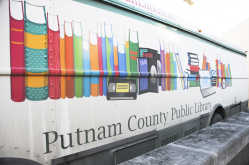 Having served the people of Putnam County for more than 60 years, the Putnam County Public Library Bookmobile will make its final run later this month, with the library disconintinuing the service at the beginning of March. (Photo by KYLE HOLLINGER)
Order this photo

The Bookmobile was originally created in hopes of bringing a portion of the Putnam County Public Library's collection to patrons in remote areas. However, over the years library staff has found the Bookmobile to not be as effective as it would like, with patron usage declining.

"Bookmobiles are kind of a thing of the past, but that's not really why we're doing this. The focus is that there is a better way to get materials in the hands of library users who can't make it here then to put it on a giant RV."

The new service will be open to all of Putnam County Library's patrons and will allow users to check out any of the library's materials such as DVDs, video games and books for all ages.

Carson noted that the end of the Bookmobile service is also coming at a good time, as construction is set to begin on Vine Street in the spring.

"The library probably has the most difficult vehicle and the most difficult situation as far as the city is concerned to get in and out," Carson explained. "For us, it's good timing. It just makes sense that if they're going to start this construction project on the street that you use to get in and out every day, and you're going to end that program, it's a good time to end it when construction starts."

The materials delivery program itself will likely be done with a different, more cost effective vehicle, as the Bookmobile RV has had a lot of maintenance issues as of late. Carson noted that the library hopes to be able to sell the Bookmobile in to provide some funding for the new service. However, a Bookmobile is a bit of a niche.

"It's not that we're cutting a service. We are trying to improve an existing service," Carson said. "The Bookmobile in its current form, essentially a giant RV, is just not cost-effective. We're trying to make this outreach service more flexible and more nimble. The Bookmobile likely won't make any money. I really don't expect it will make much, but what we do will go into leasing or buying a van."

Library patrons are advised that there will likely be a period of down time in between the end of the Bookmobile program and the start of the materials delivery program, as the library is still working out some of the logistics that go along with it. However, the library is hoping it will not last more than two months.

"I'm hoping that people will really appreciate having the library say that we will effectively bring your materials to this agreed upon drop-off/pick-up point," Carson said. "It's better than the way we've been doing it."