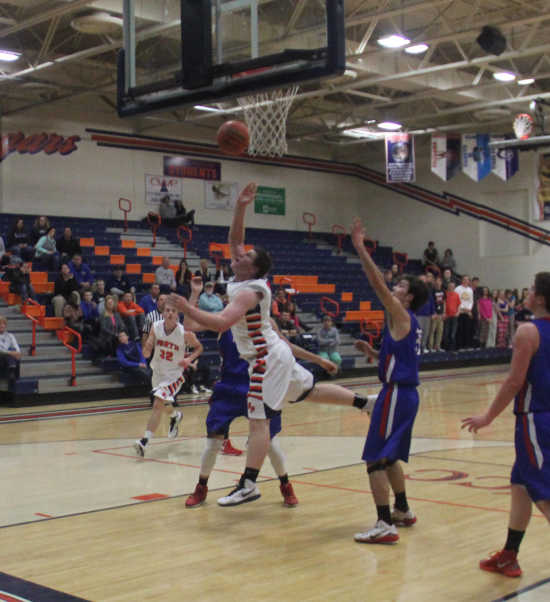 Kyler Jeter goes up for two against the Eels. (Banner Graphic/JAY LOCKETT)

ROACHDALE--The North Putnam boys' basketball team was able to hang with Eminence for two quarters but fell behind after halftime and took the loss 72-46.

The Eels began with a fast-paced offense, but North Putnam was able to keep it close early using three-point shooting to put points up. Junior Preston Porter hit two in the first and freshman Treyton Smith hit another.

Junior Kyler Jeter, who was producing all game for the Cougars, scored four in the first.

"This team has been through a lot of changes," North Putnam coach Collin McCartt said. "Our makeup looks a lot different. Then we were down one starter tonight with an illness. I thought we came out and got to a shaky start. Credit Eminence, they did not miss many shots."

North Putnam's Corbin Judy was missing from the lineup but even without his efforts, the Cougars stayed in contention through halftime. Austin Judy, who hit two foul shots in the first, nailed a shot from long-range in the second quarter along with Porter.

But the 45-29 halftime lead grew as the game progressed. Jeter scored seven in the second half and sophomore Jordan Bean scored his six points all in the fourth and mostly from the foul line. The Eels however outscored North Putnam 14-4 right after halftime and North Putnam couldn't recover.

"We just made a couple of errant plays that gave them some buckets," McCartt said. "We got it down to six or seven but just like that it was 15. They came out and hit some shots again and our guys put their heads down a little bit."

The Cougars continued to fight, matching Eminence's 13 points in the final quarter but the damage was done.

"In the fourth quarter we competed a little bit better than we did," McCartt said. "You know our guys are young and they understand this is a process. It's certainly not easy to go through. I think these guys will see the benefits of having to go through this in the coming seasons. It'll make them tougher and they'll appreciate being together a little more. I think they'll understand what it takes to be successful.