The National Weather Service has a issued a Wind Chill Advisory for Putnam County and most of west-central and south-central Indiana through 9 a.m. Monday.

Wind chill values are expected to fall to 15 to 25 degree below zero overnight as another arctic blast sends real temperatures tumbling below zero. 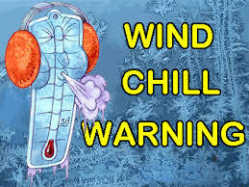 Overnight lows are expected to fall to around 5 below zero Monday morning, likely breaking a record in the process (the current mark is -1).

A Wind Chill Advisory means that a combination of very cold temperatures and significant winds will generate wind chills that could result in frostbite and lead to hypothermia if precautions are not taken.

Anyone who must venture outdoors is urged to wear a hat and gloves, the National Weather Service advised.

The latest arctic blast comes on the heels of winter's most prolific snowstorm, which dropped in six inches of white stuff on the Greencastle area Saturday, according to official local weather observer Diana Foust.

In fact, the six-inch storm total amounts to more snow in one storm than otherwise had fallen in the entire winter season previously.

The latest snow puts the area total at 11.3 inches for the winter.

That pales in comparison to last year's record 52.2 inches of snow.