Educating local residents on the status of bills and pending legislation likely to affect their lives in the near future typically has been the mission of the long-running Putnam County Farm Bureau Legislative Update series.

Saturday morning, however, it was a group of educators doing most of the educating, letting the three lawmakers who represent Putnam County in the Indiana General Assembly know exactly where they stand on educational issues that have emerged front and center in the current session of the Legislature. 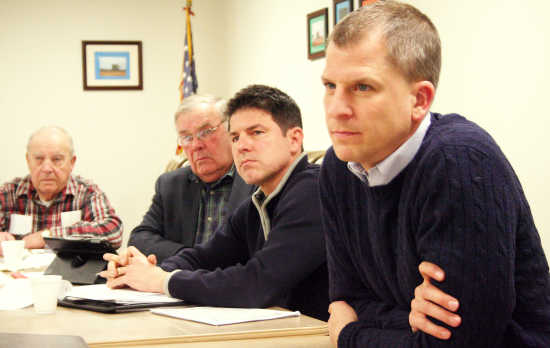 Listening intently to audience members' comments Saturday morning about proposed legislation that is before the 2015 Indiana General Assembly, the three lawmakers who represent Putnam County await their turn to respond. District 24 State Sen. Pete Miller of Avon (foreground) is joined at the head table of the Farm Bureau meeting room by District 37 State Sen. Roderic Bray of Martinsville (center) and District 44 State Rep. Jim Baird of Greencastle.
Order this photo

Senate Bill 1 was the measure most of the audience of 27 that braved the snowiest morning of winter to come to the 8 a.m. Saturday program wanted to debate.

That's the disputed bill that would change the composition of the Indiana State Board of Education, altering it so that the state schools superintendent (presently Democrat Glenda Ritz) would not automatically serve as board chairman.

And after about 45 minutes of back and forth Saturday morning, with legislators defending their positions and constituents looking for better answers, Ridpath Primary School teacher Beva Miller summed up the teachers' frustration with the proposed legislation.

"I think we say 'no' on Senate Bill 1," she emphatically told State Rep. Jim Baird and State Sens. Pete Miller and Rodric Bray. "I think you can take that back (to Indianapolis) with you."

That remark produced a smattering of applause from audience members, more than half of whom were local educators.

Sen. Miller (R-Avon) assured that Senate Bill 1 indeed has been a hot topic on his Facebook page.

He reminded the group that presently 10 of the 11 State Board of Education members are appointed by the governor, while the 11th member is the reigning superintendent of public instruction.

The bill at hand, Sen. Miller said, would reduce the board to nine members, only four of whom would be appointed by the governor.

Two others would be appointed by the House and two others by the Senate. The ninth member would be the superintendent of public instruction.

"Picking on the state superintendent is not our intent at all," Sen. Miller said. "If this bill passes, in fact, she (Ritz) could be the only person who would still be on the board."

Configuring the Board of Education in such a manner, he added, would put Indiana in line with how 48 other states operate.

But the timing of the issue is what has evoked emotions and even conspiracy theories along the way.

"Ideally," Sen. Miller said, "we would not do this now." Instead, as he suggested, waiting until the end of the current superintendent's term in 2017.

The Board of Education, however, is totally dysfunctional as it presently stands, the Avon Republican said. And the Legislature, he said, needs to move forward to break that stalemate. Miller pointed out that the board has met at times for 10 or 11 hours without reaching resolution on an issue.

Educators present, however, questioned whether a bit of contention is really a good reason for changing rules that have been in place for years.

The whole situation, it was also noted, seems a lot like the old "I'll-take-my-ball-and-go-home" fatalist attitude.

"That's not how we feel," Sen. Miller assured. "We are pro public education. We are pro teacher."

Audience members, however, hinted at ulterior motives such as revenge against Ritz or how the disruption of Gov. Mike Pence's supposed "shadow Department of Education" might hurt his chances of running for president of the United States.

"Folks," Miller added, "you are ascribing motives that you don't know."

"Those are assumptions," he said. "What bothers me most is we've got students right in the middle of this, impacting their lives and the future of the country."

Baird said he wants to see the board function as it is supposed to for the good of education and Hoosier children.

Hoping to see the issue settled as quickly as possible, Baird added that he is "concerned about those kids just sitting there in limbo."

As a lawmaker, Miller interjected, his responsibility is to step back from all the politics involved and make the situation better.

In that respect, Sen. Miller argued, "Senate Bill 1 is a better method of discussing policy and getting things done. The superintendent would still be the most important person in the department."

"It's not a personal thing," he stressed. "It's not a political thing. It's a good government thing."

"I have no problem with contention," he said. "Contention is a healthy part of democracy."

He reminded the group that the bill actually takes six appointments away from the governor.

"Don't think for a second he's happy about that," Bray added.

The third and final Legislative Update session is scheduled for 8 a.m. Saturday, March 21 at the Farm Bureau Insurance office on North Jackson Street in Greencastle.