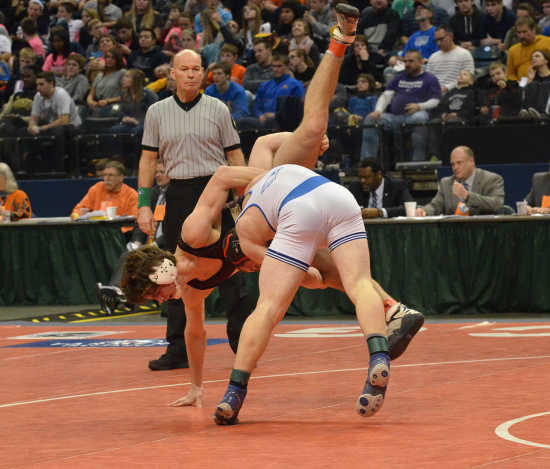 Shaffer, who won his first-round matchup with Yorktown's Hunter Hiestand, fell to Lawrenceburg's Mason Parris in the quarterfinals before rebounding to pin Elkhart Memorial's David Eli.

In the placement match, Shaffer lost a tight overtime decision to Chesterton's Andrew Davison to finish the season sixth with a record of 41-3. 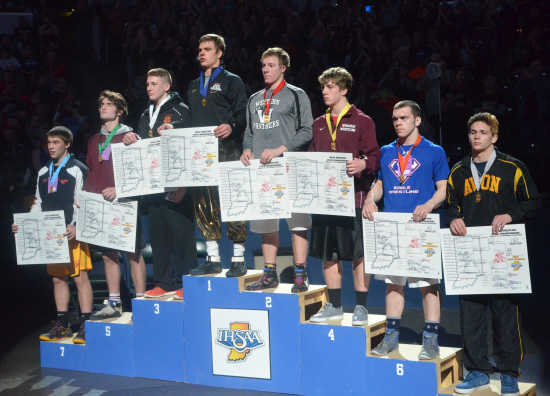 In the quarterfinals matchup, Shaffer was paired with the undefeated Parris. The Tiger freshman was quicker to every attack than the Eagle sophomore, resulting in several takedowns in the first and second periods before Parris finished the match by fall.

Hendrickson said Shaffer ran into a wrestler who could attack in a way that none of the Eagle sophomore's past opponents could.

"He ran into a pretty good wrestler," Hendrickson said. "Parris is only a freshman but he has all kinds of wrestling accolades to his name.

"The kid had really long arms and knew how to finish from underneath a defensive headlock position, something Kyle really hasn't seen before. He got it figured out a little too late, but Parris is a very good wrestler."

Shaffer added that Parris found an attack that worked and stuck with it.

"When you wrestle in the first round, you want to find someone's weakness and keep going at it," Shaffer explained. "Unfortunately, he found it first and kept digging in at it.

"I didn't correct it in time and he won the match."

Shaffer fared better in his consolation round match with Eli, though the Tiger sophomore scored the first takedown of the match in the first period.

Eli shot in at Shaffer in the second period, only for Shaffer to pull the Memorial wrestler over and, after a quick scramble, secure a pinning position that eventually resulted in a fall for the Eagle wrestler.

Despite the early struggle, Hendrickson said Shaffer pulled out an important win to advance to the fifth-place match.

"He got the pin, which was great," Hendrickson said. "Eli was a big, strong kid and Kyle has not wrestled many kids stronger than him.

"It might have shocked him at the start but wrestling is all about scrambling. He won the scramble and that put him over the top in the match."

"It felt good," Shaffer said. "I was a little worried about the takedown but you have to keep battling back and doing the best that you can and I thought I did that."

In the fifth-place bout, Shaffer opened the match against Davison and gave up an escape in the first period for a 2-1 lead.

Davison started the second period with an escape and took Shaffer down before the Eagle sophomore escaped to close the gap to 4-3.

Shaffer escaped and took down Davison midway through the period, only to be reversed by the Trojan sophomore.

Overtime was required to separate the pair and Davison got the jump on Shaffer, scoring an early takedown to win the match and consign Shaffer to sixth place.

Hendrickson felt Shaffer probably shaded the match in the end but did not get the final takedown necessary to win.

"He came out against the third-ranked kid in the state and really should have won the match," Hendrickson said. "That was a tough one because he was about five seconds away from an escape at the end of regulation.

"It was a close call on the last takedown, but it was still a tough loss."

Shaffer said it was a tough match and was disappointed with the late takedown.

"You wrestle to win the match, but he wrestled well," Shaffer said. "He got in on a shot, I wasn't ready and things happen."

With the season now complete, both Hendrickson and Shaffer said there were positives to take into the offseason but plenty of work still to be done, both individually and with the team.

"We need to work hard in the offseason," Shaffer said. "We'll get there as a team.

"We have a lot of people coming up next year, with a couple of stud underclassmen like Kieffer (Vittetow) and Cody (Wyatt). They're all good athletes and I think we'll be a force to reckon with.

"I need to work hard and work on my flaws," Shaffer added. "I need to wrestle with everyone that I can, get as much mat time as I can and come back next year to do better."

"Hopefully, the team will feed off of this and we'll get some more participation in the offseason," Hendrickson said. "This will get kids excited about wrestling and that's what you want to see.

"For Kyle, that match will serve as some motivation to come back for next year. Hopefully we can get him on some offseason teams and get him rolling to get better."