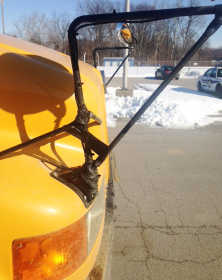 In a photo taken on March 6 black tape is shown securing a mirror to the bus. (Courtesy photo)

ROSEDALE -- At the first of March, the Indiana State Police Commercial Vehicle Enforcement Division received an anonymous tip alleging that some of the North Central Parke School Corporation school buses may not be in compliance with state law.

In response to the anonymous accusations, ISP Commercial Vehicle Enforcement Senior Trooper Tyler Van Ness randomly inspected four of the NCPSC buses on March 5, and immediately placed two of those buses out of service; one for inoperable stop arm light and faulty fire extinguisher and the other bus for an inoperable warning light.

The third bus was ordered to repair an inoperable marker light, while the fourth passed the random inspection.

On March 6, ISP Commercial Vehicle Enforcement Troopers Van Ness and Brent Hoover returned to the NCPSC and conducted another random inspection of buses. Two additional buses were placed out of service; one for broken mirror mount, loose mirror and heater motor inoperable, and the second for unsafe brakes, emergency exit window inoperable and an inoperable heater motor.

Six other buses were ordered to make repairs for such items as inoperable lights, no emergency instruction decals in place, and a faulty fire extinguisher.

Later in the day, the NCPSC had repaired five of the buses and they were approved for transporting children. In all, only one of the 12 buses successfully passed the initial random inspections.

The Indiana State Police is charged with annually inspecting all school buses in Indiana and semi-annually inspecting buses that are 12 years old or older. Troopers also conduct random "spot checks" throughout the year. Those inspections results are publicly accessible at the www.in.gov/isp.

Questions concerning the bus inspections can be directed to ISP Senior Trooper Van Ness at the Putnamville Post at 653-4114.