The transition to 1:1 technology is already in full swing in the sixth grade social studies class of Paige Tesmer. (Banner Graphic/KYLE HOLLINGER)

The world is increasingly punctuated by the presence of technology, a fact that does not seem poised to change anytime soon.

And Greencastle schools are being rewarded for their understanding of this, with $100,000 to be exact.

The money comes from the Indiana Department of Education and the school is excited as it looks forward to providing students with a modern experience in the classroom.

The Greencastle Community School Corporation (GCSC) was recently chosen as one of 19 recipients of the 2015 Digital Learning Grant based upon a proposal that highlighted the leaps and bounds made with the 1:1 technology program during its first year of integration.

That program put an iPad into the hands of teachers and students in grades 6-12 for the 2014-15 school year.

The $100,000 is slated to be used to replicate the digital transformation success in Greencastle Middle and High Schools and transplant it into the classrooms of Tzouanakis Intermediate School.

According to assistant superintendent Jeffrey Hubble and technology integrator Scott Weltz, the program doesn't just give educators new ways to present the same materials, it provides a slew of benefits to staff and students alike.

"We didn't want them (teachers) to just Xerox or scan their book page into the iPad so that kids would just fill out the same worksheets that they always have," Hubble said, elaborating that it is "not what was on the device but what can you get to through the device.

"That was a big factor for us because one of the goals is to create sustainability of the device through finances. We looked at the approximately $4.5 million that we were spending on textbooks in six-year cycles. Is there a way to convert that money into a device that, when there was a civil war somewhere and the country's name changed or the borders changed, it changes on the iPad? If you have a book that's being printed when the war happened, it's going to be printed wrong and then we're going to use it with the wrong material in it for the next six years.

"We saw it as an opportunity to invest the money differently"

As the school corporation looks toward digital transformation at Tzouanakis, both Hubble and Weltz explained that the approach may be very different than the one used for the 1:1 program for older students and that technology integration is not a device-based movement.

"Just because sixth through 12th grade does it one way, does not mean that's what is good for third-, fourth- and fifth-graders" Hubble said.

Weltz elaborated, "It is not an iPad movement. It's not a device movement. It's digital transformation. It's being able to do things and prepare kids for their future," he said regarding the discussion of what the Tzouanakis roll out might eventually look like.

Weltz also pointed out that the school keeps in mind what is best for the student group being looked at when considering which device is best, not the other way around.

"It's picking the right tool for the right job and not using a hammer to fix everything that goes wrong with your car so we're going to make sure we pick the tool that is gonna do the right job."

The conversation also focused on feedback directly from educators.

Hubble emphasized that the conversation is really about "how do we help you deliver learning? And then we're going to get a tool to help you do that. It's not about selecting a device, it's about what tool will help us make kids learn and make the learning that they do stick longer," he said. 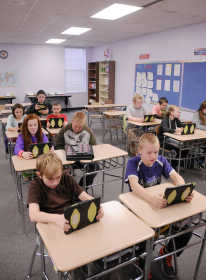 While an expansion to other GCSC schools has always been in mind, the recent grant makes that process a reality.

GCSC is unique in its dedication of having a five-person technology team that is solely for managing digital integration.

With superintendent Dawn Puckett having been a technology integrator in the past, support from the administration is anything but lacking.

"Technology changes at the drop of a hat and you need someone who can devote the time and energy to learn whatever is coming next and have it ready for professional development," Weltz said of his position.

"You don't want them (teachers) figuring it out on-the-fly in front of kids in a classroom."

In addition to up-to-date information, new teaching methods for educators and providing new approaches to learning for students, technology in classrooms is also about fulfilling the mission of teachers and public educators at large: Appropriately preparing children for the world in which they will live.

"We're in this information-at-your-fingertip age and new jobs are created all the time so are we to just prepare kids for a life that has no technology in it? How can we do that? How is that fair?" Weltz said of the imperative nature of students using modern techniques in the classroom.

As a father Weltz also wants the most comprehensive education for his own children, who attend GCSC schools.

"I want my own kids to have the opportunity when they graduate to compete in this technology-at-your-fingertips-informational world and in order to be prepared for that, they have to do the basics but they also have to use technology," he said.

"If we don't do this, we're doing them a disservice. That's not what we're here to do."

The recent grant money is more than just money to the school district, it is an affirmation of the accomplishments the corporation has made in what has only been its first year with the 1:1 program and digital transformations in the classroom.

At this rate, the school is beyond just avoiding a Sputnik moment for its students, it is ahead of the curve and looking to the horizon as it sets an example of how tomorrow's generation can benefit by using today's technology.

Some days that means a touch-screen device and according to Weltz, "some days you use chalk."

For more information about GCSC digital transformations, persons may visit http://www.greencastle.k12.in.us/1-1-technology where the school has created a dedicated mini-site for the topic, including frequently asked questions.