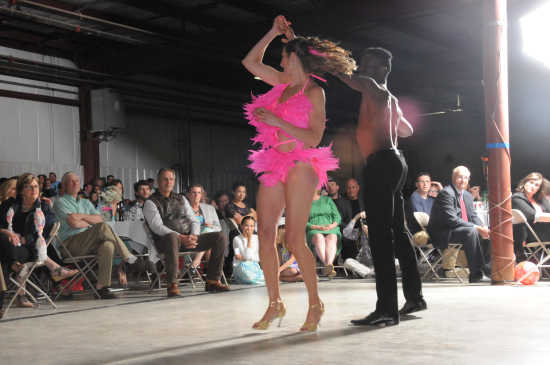 Banner Graphic/KYLE HOLLINGER Suzanne Masten and Andre Williams were the top dancers at the 2015 Dancing with the Putnam County Stars Saturday night. The duo performed a samba.

CLOVERDALE -- One woman swept the 2015 Dancing with the Putnam County Stars as the top dancer and top fundraiser Saturday night.

Suzanne Masten was voted as the dancing champion and raised enough money to be the fundraising extraordinaire -- the top honors at the annual event.

Masten hit the dance floor with her partner Andre Williams to perform a sexy samba during the annual event that raises funds for the Putnam County Youth Development Commission. 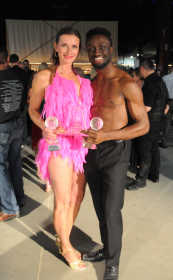 Banner Graphic/KYLE HOLLINGER Suzanne Masten (left) took home top honors in both the dancing and fundraising categories Saturday night. She and partner Andre Williams turned up the heat with their samba.

Masten describes her employment as CEO of Casa Masten. She is married to Todd and has four children. She is active in the Greencastle Civic League and 100 Women Who Care.

She took to the dance floor in a hot pink, feathery outfit. The partners danced to "Hip Hip Chin Chin" by Club Des Belugas.

"I knew after seeing Andre I would have to order an over the top outfit to match him," Masten said with a laugh about her shirtless partner. 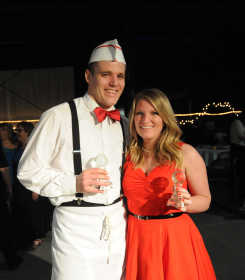 Banner Graphic/KYLE HOLLINGER Amy Walter was the runner-up in the Dancing with the Putnam County Stars event. She and partner Logan Kuhne hit the dance floor with a swing/cha cha number to Meghan Trainor's hit song "Lips are Moving".

The duo received a 10 out of 10 paddle score across the board from the judges. The final tally included a more detailed point count.

After the performance, event judge Karen Temple asked, "Is it hot in here or is it just me?"

Judge Eddie Felling said he was surprised at the moves Masten still has despite being the mother of four children, and Michael Goss noted the performance was professionally executed. Final judge Madeline Hayden, who is the 2015 Indiana State Fair Queen, said she could not pull off the feathers likes Masten did.

Williams said even though he has participated with the Dancing with the Putnam County Stars in the past, he had never done the samba before. They took dance lessons together and practiced for several hours a week for the last month and a half.

Masten said, like the other participants, she had no dance experience before participating in the event.

"Every dancer was a winner tonight. It takes courage. None of us had dancing experience. When I showed up to the first group practice, I wanted to throw up. But, the best part is, it's not about the winning. It was all about raising money for our youth," Masten said.

In addition to dancing her way to the top, Masten raised almost one-third of the total brought in by the participants.

Linda Merkel, Executive Director of the Putnam County Youth Development Commission, said the totals include the money brought in by the participants bringing in sponsors, selling seats at the event, for each item sold during the silent auction and a donation bin at the event.

Merkel said when Masten agreed to participate in the event, she set a goal for herself to beat last year's top fund raiser, Brian Black, who brought in around $10,000.

"She said, 'I can't dance, but I can fund raise'," Merkel recalled.

Masten said the key to raising that amount of funds was to ask everyone she could find to donate to the cause.

"I continued to ask people. I leveraged some money and found some matching funds," Masten said.

Amy Walter, and her partner Logan Kuhne danced a swing/cha cha number to a more recent hit, "Lips are Moving" by Meghan Trainor. The high energy performance landed Walter, an employee at Felling and Felling Law Office, the runner-up in the Dancing with the Putnam County Stars event.

One of the event judges, Eddie Felling, sat among the audience during Walter's performance because they are set to get married later in the year.

"I was scared he was going to drop me," Walter said with a laugh. "I'm getting married in September, so I didn't want to break anything."

Kuhne first taught Walter about swing dancing then the cha cha, so as they practiced the routine he would be able to help her understand the moves.

The second place fund raiser was Clayton Tomasino, who brought in about $6,000 to the competition.

Merkel noted Tomasino, the CEO of Scorpion Protective Coatings, also agreed to a partnership of about $13,000 with his company and the PCYDC to provide education services to local youth.

Merkel said an overall total should be available during the first of the week, but she believes they have surpassed last year's totals with the help of the 12 stars and almost 800 people in attendance at the event.

She stressed this event focuses on the youth of Putnam County by raising the needed funds to provide services and information to the community through the Youth Development Commission. PCYDC helps to further youth, encourage productive behavior and provide quality education.

To see a gallery of photos from the event, click here.