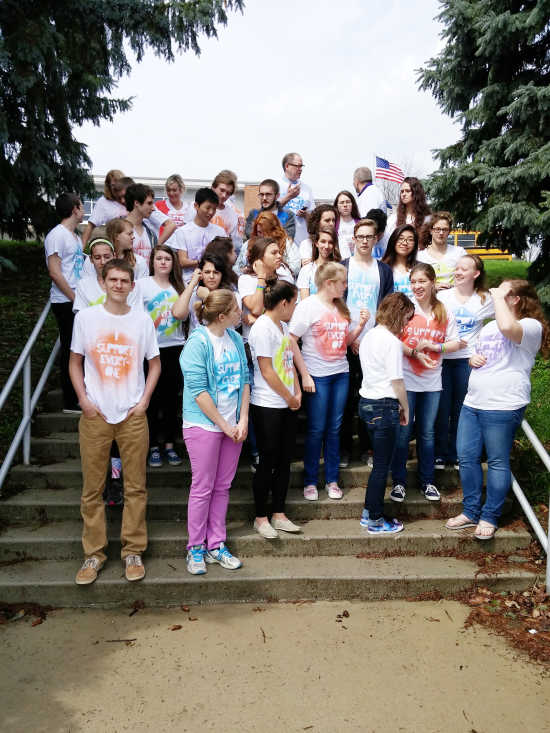 The odd combination of spring break in the Carolinas and news of the Gov. Mike Pence signing the Religious Freedom Restoration Act (and the subsequent media backlash) gave Greencastle High Schooler Amelia Smith an idea to help bring her student body together: homemade T-shirts with a message.

Smith created around 20 shirts with the message "I Support Everyone" emblazoned on it, not realizing she would sell out of them almost as soon as she said she was selling them.

"It was super cool how everyone came together. It was built from there," Smith said.

Smith hasn't been alone in the campaign, having joined up with other students at the school to turn the shirts into a fundraiser.

Together with the Diversity Club, the students began to disseminate not just apparel, but a complete way of thinking that extended naturally from the anti-bullying programs they'd been exposed to throughout middle and high school.

"It is amazing how far the school has come," student Becca Moore said regarding the atmosphere in the hallways.

"Although we have had a corporation-wide anti bullying campaign, we have failed to mention the most common type of bullying in our schools which is bullying LGBT children. That was also part of the reason why this is such a powerful addition to the anti-bullying movement."

But the shirt campaign isn't the only grass-roots, guerrilla-style, anti-bullying message going around Greencastle's campus.

Student Katie Rose Parsons has placed messages on bathroom mirrors laying plain the body image and issues of self worth associated with being constantly bombarded by advertisements and messages of self-improvement.

One sign reads "WARNING: Reflections in this mirror may be distorted by socially constructed ideas of 'beauty'"

That simple sign has turned into a conversation, with students placing sticky notes on the mirror to show appreciation for how the messages positively affect them.

Moore explained that anti-bullying should also be turned back on individuals; how they see themselves and what they think when they look in the mirror.

"We look in the mirrors and we judge ourselves," she said.

Moore also created magnets with positive messages on them to place on school lockers.

Being the savvy students that they are, they have also curated social media to add to their success.

Bailey Zapp runs the group's Instagram page (you can follow them at: Support_Differences) and Smith didn't know about Diversity Club until she came across it through social media and Moore's magnet project.

Administrators are also on board with the message and the recent shirt movement.

The school has embraced positive outlook and anti-bullying sentiments as seen on signs it has posted which claim the Greencastle Tiger Cub way is to "just treat everyone better."

The students seem to be manifesting this in their lives.

"This is just another example of that (the slogan) happening," Hesler explained.

All proceeds from the sale of the approximately 70 shirts have been given to the Diversity Club and marks a fundraising event that appears to have a future.

"We've already thought about projects and events for next year," Zapp said.

The four girls working to spread messages of tolerance and acceptance are not alone, they rely on fellow students, administrators, members of the community, anti-bullying programs and of course, their parents.

Asked if her parents were supportive of the project, Smith half-chuckled,"my parents have let me make the entire house smell like spray paint the last few weeks."

The shirts have sold out for this year but for those interested in getting their hands on one, future fundraisers can be found through the group's Instagram page Support_Differences.