Clover softball secures a road win for a split 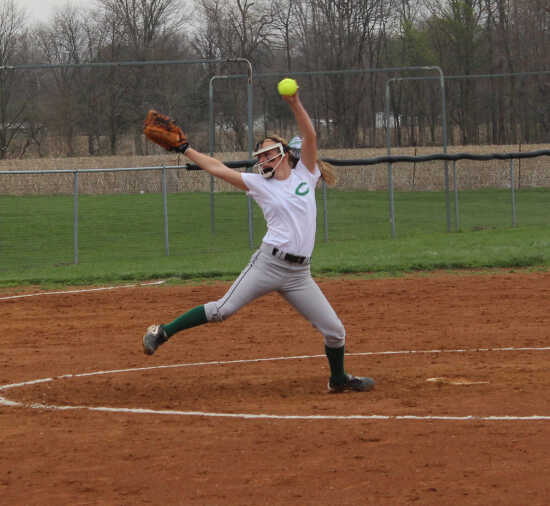 Lauren Meek pitches against Monrovia in the second of two games this week. (Banner Graphic/JOHNATHON GOODE)

"I was really pleased with some of the things we did defensively," Coach Jim Spencer said. "Offensively, even though we didn't score any runs I thought we had some good at-bats. I thought we improved on some of our at-bats against a really good pitcher. You have to see a pitcher like that to get better at hitting."

Senior Erica Tharp pitched off against Meek for the Bulldogs and as Spencer said she had a good outing. She allowed a lead off double to Makayla Westell in the bottom of the fifth inning and that was the only hit that slipped away.

Good defense kept Cloverdale in the game and gave them a chance to win. It was a Monrovia 2-0 lead going into the final inning of play when the Clovers allotted the final two runs of the game.

Three base runners total was all the Clovers could muster up against Tharp and no more than one runner was on at a time with all three coming in back-to-back-to-back innings. Besides Westell, junior Kelsey Helterbrand and senior Maddy Smith each got on base because of a walk and an error.

"We just couldn't get base runners back-to-back," Spencer said. "We'd get one on and then we couldn't get them moved up. Monrovia's pitcher is just a really good pitcher and when you don't take advantage of getting people on base she's going to be difficult to score against.

"We just got to get better and more disciplined at the plate," Spencer said. "We just got to continue to make the plays in the field and not give away any runs. You're going to give up some runs, but we want to cut down on giving runs away."

Cloverdale took the second game 9-4 to improve its record to 4-1.

Meek pitched all seven innings only giving up the four runs. Senior Jessica Winders notched three singles in the win and Kiley Shedron picked up two.

Meek also played well at the plate recording a singel and a double.

Cloverdale's next game is on Monday against County Rival North Putnam.