Cougars struggle at home against Rockville 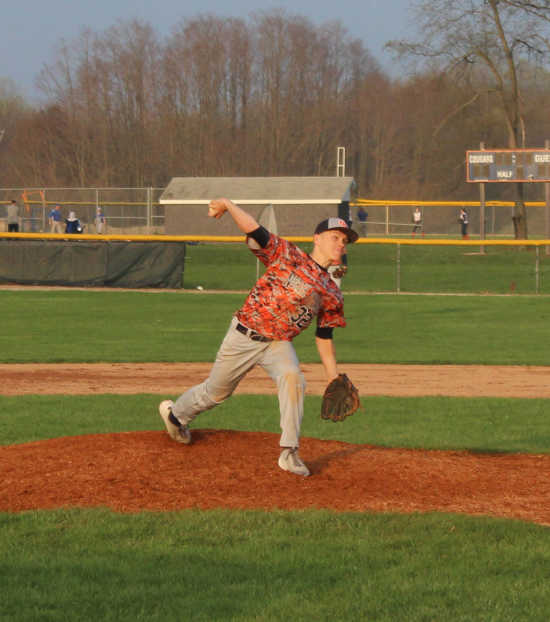 Freshman Hayden Rudes came in to finish the game for the Cougars. (Banner Graphic/JOHNATHON GOODE)

ROACHDALE--Coach Brian Jeter's North Putnam baseball team fell into a deep hole early Thursday night when they hosted 1A's No. 3-ranked team, the Rockville Rox, but they only allowed three runs in the final five innings of play before losing, 10-1.

"I think we settled in at the end of the second inning," Jeter said. "I don't know whether it's because were young or don't have the maturity level yet, but they don't know how to come out and start a ball game like they do to finish."

Junior pitcher and shortstop Kyler Jeter, the son of the coach, came in to pitch at the start of the fourth inning and the Cougars fell into a rhythm defensively. He started getting ground balls, six in all, and started letting the infield play.

"Kyler Jeter came in (to pitch)," Jeter said. "He started throwing the ball and they started hitting grounders. We were letting our defense make the plays. That's what settled us in. We just made the routine plays."

Three runs were scored off of Jeter but only one was earned.

In the sixth inning the Rox started putting pressure on the Cougars again. Jeter's pitch count was in the 60's range and after retiring the first batter, Keiontre Wilkey, he put the next two batters on and Coach Jeter decided to take him out with 65 pitches.

Freshman Hayden Rudes was called upon to finish out the inning and eventually the game.

After loading the bases with one out Rudes got a fielders choice from Dalton Laney that resulted in an out at home and the very next batter Craig Overpeck struck out to end the inning. The Cougars struck out four batters as a whole.

After a hit batter and a single Rudes successfully recorded three straight outs in the seventh.

"He did fine," Jeter said. "Kyler got to 65 pitches and it's awful early in the year, so we decided to not let Kyler finish. Hayden has pitched a few times and done well. We will continue to use our freshman pitchers."

North Putnam fell behind 7-0 in the first two innings of play. Starting pitcher Max Haste felt some discomfort and had to be taken out after the first inning after giving up four runs. He gave up three singles and two walks.

Coach Jeter felt his bats were subpar. His team recorded just six hits on the night with three of those coming in the fourth inning. Junior first basemen Bobby Scheele singled and eventually scored the Cougars only run of the game in the inning.

"Not very good (batting performance)," Jeter said. "We weren't aggressive. We were sitting back trying to let the game come to us instead of jumping out on teams. As far as hitting I think they just have ti make up their minds to be a little more aggressive."

Rockville has a very solid reputation including a 2014 state champion runner-up performance to add to their resume. This was a good experience for a young Cougar team with only one senior and they learned to improve only being outscored 3-1 in the final five innings.

"Rockville is ranked in their division," Jeter said. "What we took from it is that the last five innings we played a 3-1 ballgame. We just played a team that is a lot better than us and played them to a 3-1 finish. That's what we told them. Now let's take this and build on it."

The Cougars will get another chance to win Saturday morning when they travel to Western Boone for a 10 a.m. start.