Competitions and electric renovations for students at Area 30 Career Center 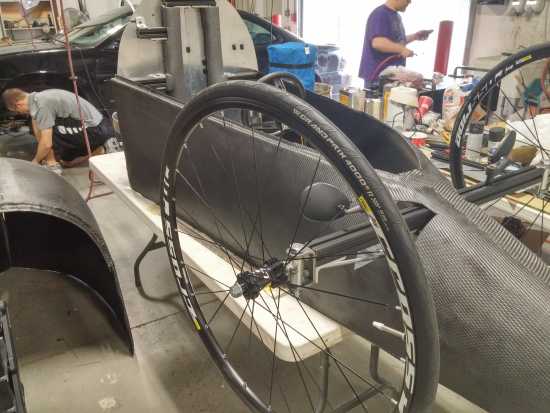 Area 30 students are building a "super mileage" car using carbon fiber to see which of the 40 high school teams can finish the 6.25-mile course using the least amount of fuel. The competition is set for O'Relly Raceway Park on April 27. (Photo by KYLE HOLLINGER)

Student competitions and an electrical project were among several items discussed at the Area 30 monthly board meeting Tuesday.

The electrical renovation has been made possible by the Citizens Advisory Commission For Industrial Development (CACFID), who allotted $50,000 to help supply enough electricity from the Area 30 Career Center to run the industrial equipment located in the annex building.

Industrial machinery is used by classes in the annex, and requires more power than was previously available. Running multiple welding booths and operating a functional garage complete with vehicle lifting apparatus are just two of the components used in the building.

In that building, Area 30 students have been building a special car out of carbon fiber to compete in a fuel-based "Super Mileage" race in Indianapolis this month.

The competition will feature 40 Indiana high schools, each utilizing the same engine as their competitors in an attempt to see which team can build the most fuel efficient vehicle.

With competitors all using the same engine and covering the same distance, gasoline is weighed before and after the event. Winners are then determined by which team's vehicle uses the least amount of fuel to complete the course.

The vehicle was first carved out on giant foam slabs, then carbon fiber was molded around the foam casts.

Area 30 will compete in the 14th annual IMSTEA Super Mileage Challenge at O'Reilly Raceway Park in Indianapolis on Monday, April 27 beginning at 8 a.m.

* The board accepted a resignation from Paula Wiggins as part-time cafeteria employee.

Area 30 holds regular board meetings at 8:30 a.m. on the second Tuesday of each month.

The next regularly scheduled board meeting is slated for Tuesday, May 12 at the Area 30 Career Center, located at 1 N. Calbert Way in Greencastle.