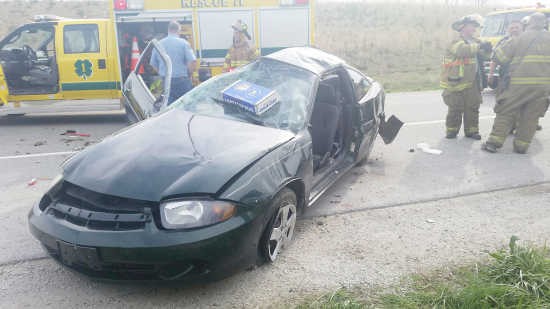 Responders clean up the wreckage following a one-vehicle crash on Interstate 70 near Cloverdale Saturday evening. The driver, 46-year-old Patricia Moberley of Greencastle, was taken to the hospital and charged with felony-level operating while intoxicated with a prior conviction. (Courtesy of Indiana State Police)

CLOVERDALE -- A Greencastle woman was hospitalized and charged with driving while intoxicated following a Saturday evening wreck.

At 5:14 p.m., Indiana State Police and Putnam County emergency agencies responded to a one-vehicle rollover crash on the westbound exit ramp of Interstate 70 at U.S. 231.

The investigation revealed a 2004 Chevrolet Cavalier was westbound on I-70 when the driver, 46-year-old Patricia L. Moberley, lost control near the westbound exit ramp causing her vehicle to roll over.

Witnesses reported the Cavalier appeared to be traveling at an excessive speed and operating erratically prior to the crash. Moberley was entrapped after the crash and extricated by members of the Cloverdale Fire and Rescue Department.

She was transported to Putnam County Hospital for treatment of extensive hand and wrist injuries. Moberley was later transferred to St. Vincent Hospital in Indianapolis for further treatment.

Numerous alcoholic beverage containers were found at the crash site.

Moberley failed a chemical test for intoxication by testing .25 percent blood alcohol content. She was not taken into custody due to her injuries, but was cited and will appear in court at a later date.

Moberley was initially charged with a felony count of operating while intoxicated with a prior conviction.