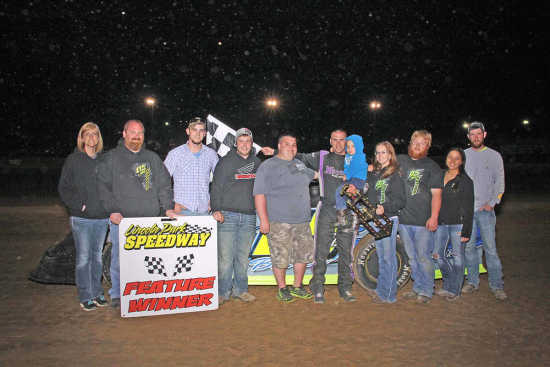 PUTNAMVILLE -- Round two of racing action took place at Lincoln Park Speedway Saturday night on what amounted to 'Family Night' at the Putnamville oval.

After returning to racing last weekend after a brief retirement, Paul Bumgardner found himself in victory lane once again. Bumgardner got past Dan Lewellen just past the midpoint of the 25-lap UMP Modified A-main and pulled away to the victory. Not to be outdone, his Carlos Bumgardner Sr., first cousin to Paul, roared away from Tim Wright in lapped traffic to take the bomber feature to cap the evening.

For Bainbridge native Josh Boller, the season couldn't have gotten off to a better start as he claimed his first career feature win to open the season at LPS. However, he was able to trump that by dominating the rest of the contenders to repeat his UMP Super Stock feature victory a week ago. 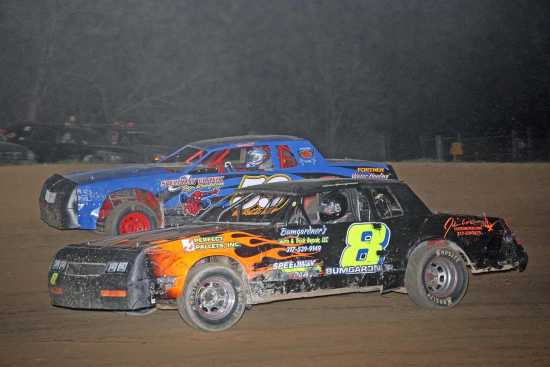 Cloverdale's Carlos Bumgardner Sr. (No. 8) battles door-to-door- with Brazil's David Wallen (No. 59) in Saturday's bomber feature at Lincoln Park Speedway. Bumgardner went on to pick up his first win of the season. (Banner Graphic/CAREY FOX)

In the sprint car division, Chad Boespflug joined the Baldwin Brothers Racing team this season to expand his race schedule and he piloted the Fox Paving, Claxton, Indy Race Parts, Butlerbuilt Creative Finishing, DRC Chassis No. 5 into victory lane ahead of Case Shuman.

Shane Cottle, Boespflug and Jerry Coons Jr. each picked up a victory in their respective heat races to set the field for the A-main.

Shuman and Chris Babcock started up front ahead of Tyler Hewitt and Coons. However, at the drop of the green flag it was Shuman that blasted to the front with Hewitt and Boespflug wheel-to-wheel for the second spot. Babcock slipped to the fourth spot before having to eventually pull to the infield with Coons moving up a spot ahead of Cottle.

Boespflug moved to the top of the track and was closing quickly with 10 laps down as the leaders pulled away from the pack. Shuman entered lapped traffic and went three-wide with Boespflug finding a clear spot in the corner to take over the point. From there, Boespflug masterfully worked the field, using the entire track on his way to the victory as Shuman took home second. Hewitt ran a strong third to hold off all challenges from two of the best in the business in Cottle and Coons Jr.

The first half of the modified feature was a master work of veteran experience by Bumgardner, who ripped around the high side. However, rising hot shoe Dan Lewellen wasn't going away as the pair ran side-by-side through the first 10 laps ahead of another door-to-door dual between Roy Bruce Jr. and Jake Humphrey. Less than a couple car lengths behind them came Gary Ricketts and Jeff Deckard battling for fifth.

By the midpoint of the race, Bumgardner was able to create some space between himself and Lewellen with Bruce trying to reel him in. Humphrey, Deckard and Kenny Carmichael Sr. were all in tight contention behind them. As he's done so many times before, Bumgardner hammered the top groove at LPS and built himself a comfortable advantage to the checkered flag. Lewellen powered home in the second spot with Bruce placing third ahead of Humphrey and Kenny Carmichael Sr.

Boller got past Scott Carrington early in the super stock A-main and never looked back in a slightly less dramatic win than last week when he made it through several green-white checkered restarts to earn his first victory. This time around he pulled away from the competition by lap five as Kenny Carmichael Sr. and Kris Starks fought for second.

Boller continued to build upon his lead to the checkered flag as Carmichael took home second ahead of Starks, Doug McCullough and Chris Hillman.

In the final race of the evening, Cloverdale's Carlos Bumgardner Sr. topped a 29-car starting field to get his first win of the season. Last weeks' winner Tyler Neal was running near the front before getting caught up in some contact. A six-car pileup on the opening lap narrowed the field a bit, but it didn't slow down Bumgardner and Tim Wright, who each emerged up front.

The front runners were quickly into lapped traffic in the A-main as Bumgardner, Wright, David Wallen, Chad Weiner and Josh Settles fought for a clear path. Wallen's night would end early after a lost wheel sent him to the infield. Settles and Weiner had an entertaining challenge for the third spot before it was Settles claiming the spot. Bumgardner pulled away through the traffic to gain the win ahead of Wright as Weiner placed fourth and Chucky Walden capped a strong night with a fifth-place run.

This weekend will feature the Bomber Spring Fling with $500 going to the winner. Sprints, modifieds and super stocks are also on the schedule.