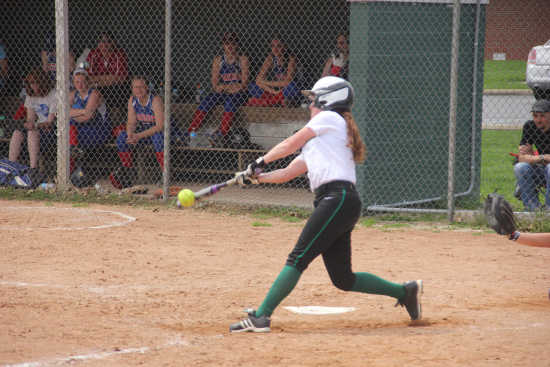 CLOVERDALE -- Whenever Cloverdale's softball team took a good swing at the ball on Saturday, it seemed Owen Valley made a great play in the field. That was the story when the Patriots won 5-0 over the Clovers.

"I wasn't disappointed in anything that we did," Clover coach Jim Spencer said. "We hit the ball hard. They hit it at people and they made the plays. They ran down some balls in the air and made some really good catches. Our defense was solid, it just wasn't our day."

Cloverdale earned a hit in the first four innings and most of the times the Clovers connected with the ball it was into a gap forcing Owen Valley to make a tough defensive play.

Unfortunately for Cloverdale, the Pats made those plays almost every time. Cloverdale on defense was equally adept only commiting on e error however the Patriots managed their four hits with runners on and scored runners at crucial times.

"I don't think we made any physical errors," Spencer said. "Maybe a few mental errors but we didn't play poorly. We hit the ball hard. We were on the ball and we didn't have any strikeouts. We hit it at people and they made the plays."

In the fourth inning when it looked as though Cloverdale might have been in position to score some runs, another tough play ended its chances.

Jessica Winders came to bat with Christa Asbury and Bailee Stevens on second and first respectively.

With two outs Winders smacked a ball deep to right field sending Asbury on an easy path home. However the right fielder made a great over the shoulder catch to end the inning and a chance at runs for Cloverdale.

The Clovers will now prepare for two games with county rival North Putnam on Monday and Tuesday.