Less than two years after upgrading its facility and adding 25 jobs, Chiyoda USA Corp. is planning a "significant expansion" of its Greencastle operations.

While details of the Chiyoda expansion are still being finalized, the project will require the acquisition of more than 11 acres of adjacent property from the Greencastle/Putnam County Development Center, Executive Director Bill Dory told the City Council at its April meeting last week. 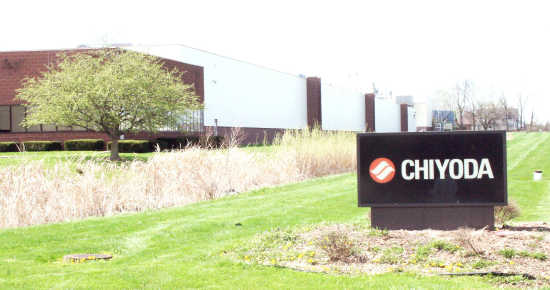 A planned expansion of the Chiyoda plant at 2200 E. State Road 240 in Greencastle will include the purchase of an adjacent 11 acres from the Greencastle/Putnam County Development Center, City of Greencastle officials have learned. (Photo by ERIC BERNSEE)

Dory appeared before the Council on behalf of Chiyoda, requesting passage of Resolution 2015-7, declaring the Chiyoda property at 2200 E. State Road 240 (the 27.89-acre site formerly owned by Happico) as an economic revitalization area and making it eligible for consideration of tax abatement.

Chiyoda is expected to return at the May 12 City Council meeting for a public hearing on abatement of the real estate and come back again in June or July, Dory said, to request for abatement on new equipment.

"This will be a pretty significant project," Dory said. "Chiyoda is putting the numbers together on an expansion of its facility but at this point the numbers (such as size of expansion, number of jobs involved and the total investment) are in flux. The surveyor hasn't even been out yet to write an exact legal description (of the

Still, the timetable is likely to see construction come this summer, Dory said, adding that the company is also seeking a training grant and tax incentives from

As might be expected, the expansion project got a favorable reception from the Council.

"Reinvesting in the Greencastle community," Councilor Jinsie Bingham commented, "what good news that is."

Council President Adam Cohen made the motion to approve the resolution with Tyler Wade seconding while Bingham and Phyllis Rokicki made it a 4-0 vote (Councilman Mark Hammer was absent).

In presenting the project to the Council, Dory was joined at City Hall by Chiyoda Production Manager Ron Muncie and Yoshio Ozawa, the plant's executive vice president and chief operating officer.

Chiyoda acquired the former Happico plant on Greencastle's East Side in May 2005. It is one of three facilities owned in the U.S. by Chiyoda. The others are in Lincoln, Neb., and LaGrange, Ga.

In May 20013, Chiyoda announced a $7 million investment in new equipment at the local plant, adding seven injection-molding machines and upgrading its paint line as part of a project that increased the workforce by 25 at the 293,000-square-foot facility.

At that time, it was noted that since Chiyoda purchased the property from Happico, the company has paid more than $1.1 million in property tax, including $173,490 in 2013.

Even with tax abatement on the equipment (which is imposed on a sliding scale) in the 2013-14 project, Chiyoda was still to pay an estimated $233,856 in additional personal property taxes over the ensuing 10 years on that $7 million in new equipment.

At the time of its last local expansion, Chiyoda listed 97 fulltime employees on its Greencastle payroll along with another 97 considered fulltime temporary employees.