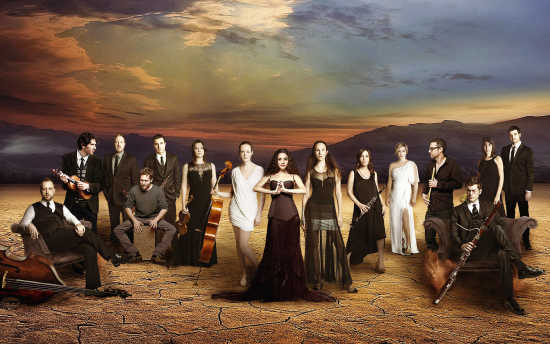 The concert, which takes place at the Green Center at 7:30 p.m. Saturday, April 25 in Kresge Auditorium, represents the culmination of Fifth House's two-year artist residency with the School of Music.

The two groups will arrive in Greencastle Thursday for a joint residency, April 23-25.

Prior to their concert on Saturday, 5HE will introduce the Tel Aviv/Berlin-based band Baladino to the community at a Friday night cookout and open jam session from 5:30--6:30 p.m. at the new School of Music House (705 S. Locust St.).

The spirited alliance represents a celebration of music that transcends borders, merging ancient and modern instruments and musical traditions. Inspired by a diverse group of cultural influences, the two groups tap into the shared experience of musical memories to explore music as an indelible part of cultural identity.

"Nedudim," which means "wanderings," brings fresh settings of Ladino and Israeli folk melodies to the stage, including Tzur Mishelo, La Esclava and Tres Hermenicas, augmenting Baladino's instrumentation to incorporate musicians from 5HE.

"I want each arrangement to feel like a home-cooked meal that you share with new friends," Baladino's lead arranger Tomer Moked says, "so that people from any culture can hear something that they might remember from the music of their childhood."

The centerpiece Saturday evening will be the premiere of "Native Tongues" by 5HE's core composer Dan Visconti. His new piece, written for the ensembles' combined forces, grew out of conversations, memories and melodies gathered through the group's work with cultural partners in Chicago over the past year. These original arrangements, the composer says, "form a kind of musical adhesive that builds a bridge between the sound of the two groups, and acts as a springboard for understanding how we share parts of our own stories and lineage through music."

Taking the creative blend a step further, Visconti and Moked joined forces to create new works for members of both groups, including a mashup of Greek and Blues scales and a Raga Etude inspired by melodies gathered through interviews with Eye on India.

The two ensembles, Fifth House and Baladino, met in Berlin in January 2015, through grant support from the John D. and Catherine T. MacArthur Foundation's International Connections Fund, to workshop repertoire for "Nedudim" and further their collaboration. A commercial recording, made possible by a grant from the National Endowment for the Arts, will be produced in September 2015.

General admission to the Green Concert is $10 in advance and $15 the day of the event. Thanks to season sponsors Judson and Joyce Green, tickets for seniors, children and all students are free.

"Nedudim" is supported by the John D. and Catherine T. MacArthur Foundation, the National Endowment for the Arts, the Consulate General of Israel to the Midwest, the Elizabeth F. Cheney Foundation, Whole Foods Chicago and Goose Island Beer Company. The Green Guest Artist concert is supported by the Arts Midwest Touring Fund, a program of Arts Midwest that is funded by the National Endowment for the Arts, with additional contributions from Judson and Joyce Green and General Mills Foundation.