BRAZIL --The Indiana Department of Transportation (INDOT) has announced U.S. 40 will close west of State Road 59 on Wednesday, April 22 from 6:30 a.m. until approximately 7 p.m. 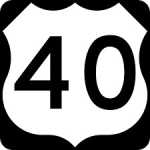 The temporary closure is needed to lower an existing 18-inch sanitary sewer line that crosses U.S. 40 at Sherman Street. During construction this line was found to be in conflict with the elevation of the new 54-inch storm drainage sewer being installed.

The detour will take eastbound truck traffic on U.S. 40 south on Chicago Avenue, then east on Pinckley Street and north on SR 59 and back to U.S. 40, truck traffic traveling in the opposite direction will use the same detour in reverse.

Eastbound cars will travel south on Chicago Avenue to east on Jackson Street and north to SR 59 and then back to U.S. 40. Cars traveling in the opposite direction will use this same detour in reverse. Police officers will be assisting motorists with this closure.