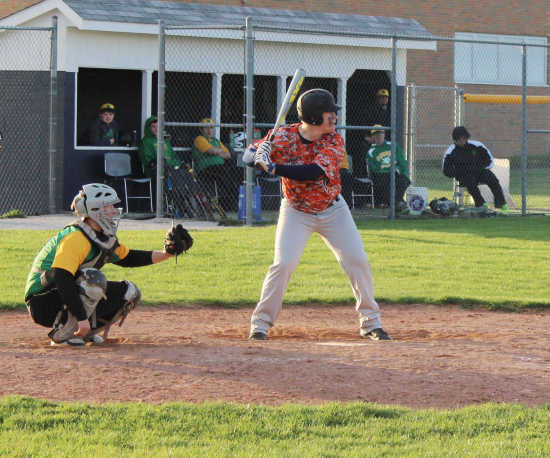 ROACHDALE--The North Putnam Cougars baseball team had hit two home runs as a team on the year. Sophomore Jack Kendall hit three Tuesday night that accounted for 10 RBIs in a 20-10 bounce-back win against the Cloverdale Clovers after losing 7-2 the night before. 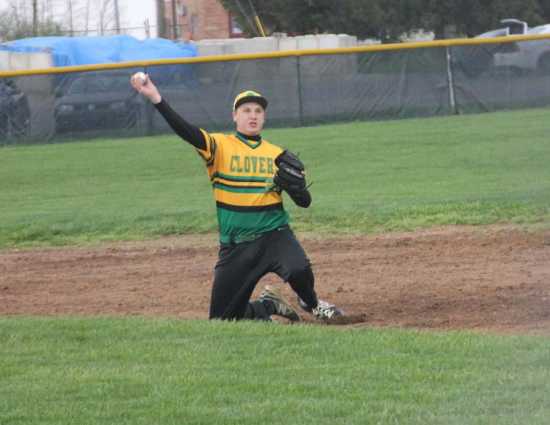 "Last night on the way home we said that we needed to start a game and be able to finish a game," Coach Brian Jeter said. "We haven't been able to do that all year. We finally put a whole game together. I'm not going to take anything away from Jack. He hit the ball well. The elements were what they were."

"The wind definitely played a part in it," Kendall said. "But I've been seeing the ball well lately. I just got ahold of them tonight."

Cloverdale started off the night where it left off from Monday by batting eight players through the order and scoring four runs in the top half of the first inning. Freshman Kaine Benge of North Putnam walked the first three batters in the sequence before all three scored. 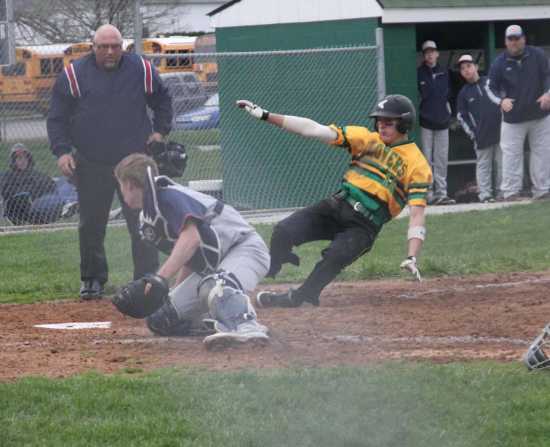 Cloverdale's Haiden Harbert-Davis slides home and avoids the tag to score the run in Game one against North Putnam. (Banner Graphic/JAY LOCKETT)

That proved to be the only lead for the Clovers in the game. The Cougars matched them by getting their first three batters on base with two walks and an error before Kendall came to bat in the clean-up position. It was there that he started his night off by tying the Clovers with a grand slam to dead center field off pitcher Duke Duff. The Cougars scored nine total in the inning.

"I brought energy," Kendall said. "The whole team really fed on that."

Kendall hit another home run in the third inning. This time three runs were batted in.

Junior Brayden White, one of the top players in the county, gave North Putnam all they could handle Monday night and Coach Jeter admired how much of a difference this kid makes. Jeter felt he caused most of the Cougar's problems in that game.

"Brayden White (difference maker)," Jeter said. "He is going to be hard to beat in conference. I've got a lot of respect for Brayden. When Brayden White pitches a game we're not going to score 20 runs. Last night we made some errors and tonight we were able to overcome some errors because we put the ball in play."

Batting was a huge success for the Cougars. All the batters made it on base at least once and there were eight multi-base hits.

"Last week we started doing some tee drills and that's what has turned it around for these guys," Jeter said. "The bats have come around because we started toing tee work. We attribute turning the bats around to the drills that we have been doing."

Wind gusts of 40 mph swept through the diamond with a constant speed of around 30. This made it difficult for pitchers to keep command and as a result 13 runs were scored in the first inning combined between the teams. Overall the Cougars progressed nicely and Jeter praised his pitchers for their effort.

"Tonight was one of the hardest conditions to throw in," Jeter said. "I think the wind was 25-30 mph out there. Pitching in those elements show some true grit. Kaine Benge, a freshman, is going to be hard to deal with in the future. Jacob Berry pitched his first game in three years and Max Haste's shoulder is better so we gave him some innings."

North Putnam held a 17-10 lead in the bottom of the sixth and had two men on bases. They only needed three to force the automatic 10-run limit with Kendall coming to plate. Kendall ended the night with his second three-run homerun of the game and again it was to center field but this time off senior pitcher Troy Davis. All three of his homeruns came off different pitchers.

"We have two goals," Kendall said. "We want to win sectionals and county. This feels great."

The Cougars will look to take this momentum ahead into a tough strength of schedule that lies ahead. Jeter said that they will move some players around and that whatever happens will happen. They will host a ranked Covenant Christian Thursday before holding the Cougar Round Robin on Saturday. South Putnam, Lebanon and Tri-West will follow.

"I think so (momentum builder)," Jeter said. "I think they needed it. We've had tough losses where we've beat ourselves. Last night we had a couple errors in an inning and they made us pay for it. They scored four runs with two outs. For these guys to come out and make some errors and bounce back I thought was the difference."