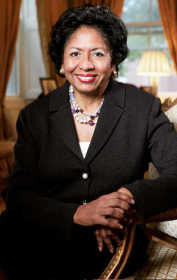 Ruth J. Simmons, the former president of Brown University and Smith College and the first African-American woman to head a major college or university, will address DePauw's Class of 2015 at the university's 176th commencement.

The ceremony will take place on Sunday, May 17 at 10:30 a.m. in Holton Memorial Quadrangle.

"Dr. Simmons has dedicated her life to the idea that a strong educational system, accessible to all who pursue knowledge, is central to improving our world," DePauw University President Brian W. Casey said. "Her message to our graduates is one that I am confident will provide inspiration as they begin their lives after DePauw."

A native of Texas, Simmons earned her bachelor's degree from Dillard University and her master's and doctorate in Romance literature from Harvard University.

In 1995 she became the first African-American woman to head a major college or university when she was selected as president of Smith College, where she started an engineering program, the first at an American women's college.

Simmons was named Brown's 18th president in 2001, becoming the first African-American to lead an Ivy League school. Under her leadership, Brown made significant strides in improving its standing as one of the world's finest research universities. She retired in 2012.

Simmons is the recipient of many honors, including a Fulbright Fellowship to France, the 2001 President's Award from the United Negro College Fund, the 2002 Fulbright Lifetime Achievement Medal, the 2004 Eleanor Roosevelt Val-Kill Medal, the Ellis Island Medal of Honor and the Centennial Medal from Harvard University.

She is a member of the National Academy of Arts and Sciences, the American Philosophical Society and the Council on Foreign Relations, and serves on the boards of Texas Instruments, Chrysler and Mondelez as well as a number of non-profit boards.

Awarded numerous honorary degrees, she received the Brown faculty's highest honor, the Susan Colver Rosenberger Medal, in 2011. In 2012, she was named a "chevalier" of the French Legion of Honor.

Simmons has been a featured speaker at the White House, the World Economic Forum, the National Press Club, the Association of American Universities, and the American Council on Education. She will receive an honorary Doctor of Letters degree from DePauw at the May 16 ceremony.

Meanwhile, cultural historian and acclaimed author Joseph Horowitz will be awarded an honorary Doctor of Music degree. One of the most prominent and widely-published writers on topics in American music, Horowitz is an orchestral administrator and adviser, he has been a pioneering force in the development of thematic programming and new concert formats and is credited with coining the term "Post Classical Music" as a moniker for art music of today.

He is director of a National Endowment for the Humanities project, "Music Unwound," which is a consortium of orchestras pursuing thematic, cross-disciplinary programs in collaboration with music schools and conservatories, including the Buffalo Philharmonic, the North Carolina Symphony, the New Hampshire Music Festival, and others.

His many other accomplishments include co-founding Post Classical Ensemble, a chamber orchestra in Washington, D.C.; creating "The American Piano," a touring collaborative festival/residency; and serving as a free-lance artistic consultant for orchestras throughout the United States.

The recipient of a Guggenheim Fellowship and two NEH Fellowships, Horowitz's books include "Moral Fire: Musical Portraits from America's Fin de Sičcle" and "Classical Music in America: A History of Its Rise and Fall."

Last fall, he was artistic director of the DePauw School of Music's "Dvořák and America" Festival.

Acclaimed poet Rodney Jones, a finalist for the Pulitzer Prize and the winner of the 1989 National Book Critics Circle Award, will receive an honorary Doctor of Letters degree from DePauw.

His books include Imaginary "Logic" (2011); "Salvation Blues: 100 Poems, 1985-2005" (2006), which won the Kingsley Tufts Prize and was shortlisted for the Griffin International Poetry Prize; "Elegy for the Southern Drawl" (1999), a Pulitzer finalist; "Things That Happen Once" (1996), a Los Angeles Times Book Award finalist; and "Transparent Gestures" (1989), winner of the National Book Critics Circle Award.

Other honors include a Guggenheim Fellowship and the Jean Stein Award of the American Academy of Arts and Letters.

A professor and distinguished scholar emeritus at Southern Illinois University Carbondale, Jones teaches in the M.F.A. program at Warren Wilson College. He has served as the Elliston Poetry Professor at the University of Cincinnati, and in 2013 was the Mary Rogers Field Distinguished University Professor of Creative Writing at DePauw.