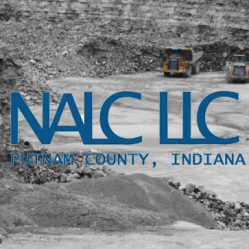 With the passage of a tax abatement on a $5 million investment in Cloverdale Township, the Putnam County Council on Tuesday cleared the way for a local company to add a second facility and 15 jobs.

NALC, a limestone and industrial minerals company, will invest $5 million to establish a second limestone quarry and fine-grind facility in Cloverdale, one-half mile from its current 174-acre operations.

Activity at the new 181-acre site will include the extraction and processing of high calcium carbonate limestone to be sold as an animal feed supplement, a fertilizer for agricultural purposes, an ingredient in the manufacturing of glass, a pollution control product for power plants, a safety application in underground coal mines and a filler for product manufacturing and other industrial applications.

NALC President and CEO Greg Gould announced the expansion will add up to 15 jobs at an average wage of $18.75 per hour.

"NALC has experienced strong growth during its seven year existence, thanks to a dedicated and hardworking team of people, favorable geology, an excellent location near key transportation routes and a favorable business environment in the state of Indiana," Gould said. "We are committed to working safe every day and providing high quality products and services to our aggregates and industrial minerals customers."

Gould was joined at the meeting by Greencastle-Putnam County Economic Development Director Bill Dory and by Doug Lawson of H & L Enterprises, the general contractor in charge of the construction project.

Serving a diverse collection of industries, the company anticipates its new quarry and fine-grind operation to be operating by October. The company, which currently employs nearly 30 people.

Interested applicants for administrative, equipment operator and quality control positions may apply at the company's campus on State Road 243, with hiring expected to begin this summer.

The expansion is actually a joint venture between NALC and Midwest Calcium Carbonates, of which Gould is also the president.

The abatement passed in a 5-0 vote by the county council.

"We are pleased to have NALC and their new joint venture, as local entities headquartered in Warren Township, growing, investing and adding jobs in our community," Council President Darrel Thomas said. "We look forward to their continued growth and success."

Founded in 2008, NALC, LLC began with the development of the greenfield quarry and added the first fine grind facility in early 2011. The company now controls more than 8 million tons of high quality reserves in Cloverdale.

Following the favorable vote, the expansion was announced statewide by the Indiana Economic Development Commission, which also announced the creation of 25 new jobs in Hamilton County with the investment of HRD Advisory Group at its Carmel facility.

"When you build a business climate like Indiana's, you'll soon discover that a wide array of industries start thriving," said Eric Doden, president of the IEDC. "From professional service firms to natural resource processors, our low taxes, reduced regulation and climate for skyrocketing success help all companies grow and thrive here."

IEDC offered NALC up to $110,000 in conditional tax credits based on the company's job creation plans. These incentives are performance-based, meaning until Hoosiers are hired, the company is ineligible to claim incentives.