Born April 6, 1922 in Greencastle, he was the son of Guy and Lola Ruth (Gardner) Tilley. 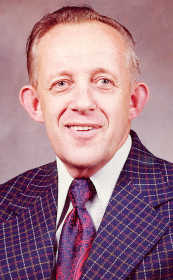 Leroy was a United States Army veteran, having served in World War II and the Korean War.

He had worked in the produce department at the Greencastle Kroger from 1942 until his retirement in 1979.

He enjoyed working in his yard and feeding and watching the birds and squirrels.

He was preceded in death by his wife, Grace Tilley; his parents; a brother, Paul E. Tilley; and sisters Frances Tilley, Helen Roberts, Mildred Rood and Betty Jean Russell.

Funeral services will be conducted at 1 p.m. Saturday, May 2 at Hopkins-Rector Funeral Home, Greencastle.

Interment with military honors will follow at Forest Hill Cemetery.

The family will receive friends from 11 a.m. until time of service on Saturday, May 2 at the funeral home.