Greening of Greencastle the envy of Indiana cities 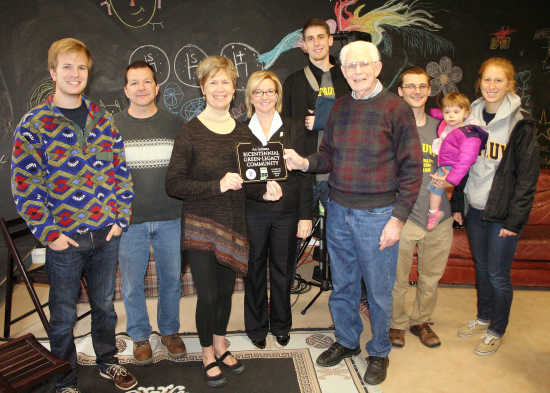 The continued greening of Greencastle has not been lost on State of Indiana officials.

That's why two of them were on hand on a cold, rainy Saturday morning -- Earth Day, wouldn't you know -- to honor the City of Greencastle as a Green Legacy Community.

The city is now one of 20 Hoosier communities so recognized by the Indiana Bicentennial Commission and Sustainable Indiana 2016. 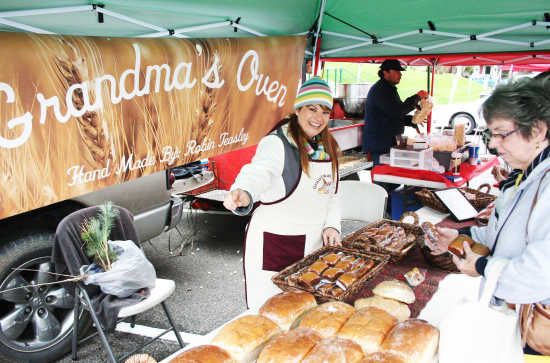 Banner Graphic/ERIC BERNSEE Before the rain started in earnest Saturday morning, the Greencastle Farmers' Market was an active place on the north side of the square on the opening day of its seventh season downtown. Students in John Garner's Greencastle High School Environmental Club helped pass out free small trees as customers snapped up kettle corn, jams and jellies and especially the homemade baked goods -- including such treats as breads, pastries and mini-coffee cakes -- offered at Grandma's Oven, operated by Robin Teasley of Camby. The farmers' market will return next Saturday morning.

Representing the Indiana Bicentennial Commission and the 200-year celebration of Indiana's statehood in 2016, Deputy Director E. Rene Stanley addressed a small but engaged audience relishing the warmth of Bagos on the east side of the courthouse square as opening day at the Greencastle Farmers' Market unfolded in the wind, rain and cold outside.

"Be proud today of your accomplishments," Stanley said, "but keep an eye to the future and be vigilant for new ways to continue the greening of Greencastle."

As emissary for Indiana Gov. Mike Pence, she told the group the purpose of the Bicentennial Commission is to "be a catalyst for Hoosiers to become involved in local celebrations" that they might spearhead projects "to leave a lasting legacy from our celebrations for the citizens of Indiana." 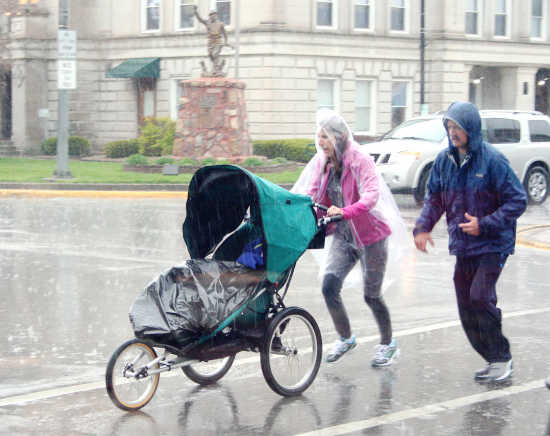 Banner Graphic/ERIC BERNSEE With their purchases covered up with plastic and their young child bundled up and belted in at the back of the stroller, a local couple dodges the raindrops as they race for dry ground Saturday morning as the first wave of rainfall makes its way through downtown Greencastle. Up until about 10:15 a.m., the inaugural Saturday of the Greencastle Farmers' Market was enjoying a surprisingly good turnout despite windy, cool conditions. The market will return next Saturday morning, offering a variety of homemade and handmade goods and goodies, and will continue weekly operations on the square until the fall.

"What better legacy can we leave for those who follow in our footsteps," Stanley suggested, "than a cleaner, more sustainable, healthier community in which to live, work and raise a family?"

"As your community volunteers continue their involvement to make this city a greener place, you will create a history worth celebrating in the tercentennial," Stanley added.

Those communities "demonstrate a mix of green initiative" that make them leaders going into the future with challenges ahead in both climate and economic areas, Gibson suggested.

"It's not just about looking back," he said, "but looking ahead for hopefully another 200 years."

Greencastle, he told the audience, has won the Indiana Association of Cities and Towns (IACT) Green Community Award more than any other city or town in Indiana, along with being designated a Tree City USA for 16 years.

Yet the City of Greencastle has an achievement record that leaves other communities green with envy.

"It's quite phenomenal," Gibson said, indicating the IACT award has 47 issues and questions it addresses, from energy efficiency to taking care of waste to providing bicycle paths and planting trees.

The Tree City designation "is not easy either," he said, noting that in order to qualify, the city must plant two trees or every one it takes down or loses to storms or disease.

Also referring to the recent Clean Community Designation bestowed upon Greencastle by the Indiana Department of Environmental Management, Gibson praised the city administration and Mayor Sue Murray in particular.

"Mayor Murray," he said, "is one of the most progressive, hard-working mayors in Indiana, and I can say that without qualm."

Gibson listed such city accomplishments as the change to more efficient downtown lighting, development of community trails, expansion of the farmers' market, creation of a community garden, implementation of a no-idle policy for city vehicles, the repurposing of old buildings, continuation of curbside recycling and the creation of the DePauw University move-out day donation program.