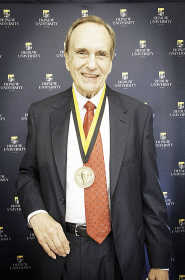 Don R. Daseke, president and CEO of Daseke Inc. and 1961 graduate of DePauw University, was presented Wednesday with his alma mater's Robert C. McDermond Medal for Excellence in Entrepreneurship.

The presentation was made as Daseke, who is a member of DePauw's Board of Trustees, presented the the McDermond Lecture to the University's Management Fellows in the Memorial Student Union Building.

An economics major at DePauw, Don Daseke earned his M.B.A. from the University of Chicago's Graduate School of Business and graduated from the Harvard Business School's President's Program in Leadership. He was a founding director of the McDermond Center for Management & Entrepreneurship at DePauw. 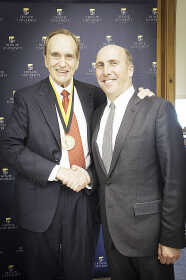 Daseke was previously the founder, chairman of the board and chief executive officer of Walden Residential Properties, Inc., a $1.7 billion real estate investment trust formerly listed on the New York Stock Exchange and the force behind the creation of the Inn at DePauw.

A regional winner of the Ernst Young Entrepreneur of the Year Award in 2014, Don Daseke has served on the Addison, Texas Town Council as well as the Addison Planning and Zoning Commission and was Mayor Pro Tempore in 2010.

He's served non-profit organizations as past president and chairman of the WaterTower Theatre; is past chairman of the Dallas chapter of the World Presidents' Organization; served on the advisory council for the Cattle Baron's Ball in Dallas, the largest fundraiser in the United States for the American Cancer Society; and was on the executive committee for the Dallas Arboretum and Botanical Society.

"It seems perfectly appropriate that we're presenting this award to Don Daseke during the 35th anniversary of the McDermond Center for Management and Entrepreneurship and of DePauw's Management Fellows Program," noted director Michele T. Villinski. "Don was an original member of the McDermond Center's board of directors and his generosity helped create the facilities we're in today. He's also been an inspiration for many DePauw students who aspire to walk the entrepreneurial path."

Established as an honors program in 1980, the Management Fellows Program is open to students in any major who are interested in pursuing careers in the for-profit and not-for-profit sectors. In addition to completing coursework and a major in the liberal arts, Management Fellows complete a semester-long, paid internship in top national and international settings. Management Fellows graduates have gone on to distinguished careers in top companies and organizations throughout the country and world. They also have been accepted for graduate and professional study at some of the nation's most prestigious institutions, including Harvard, Stanford, Northwestern, University of Chicago, University of Pennsylvania, Dartmouth, University of Michigan and M.I.T.