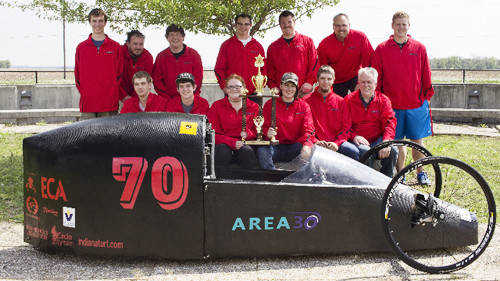 On April 27, the Super Mileage Club had the opportunity to compete with 17 high schools participating in three different classes this year.

The IMSTEA hosts this challenge which is dedicated to improving the academic skills of all Hoosier students. The challenge is also co-sponsored by Vincennes University.

Each participating school must submit a letter of intent to compete, along with a design proposal that details the many different aspects of the car. The design proposal is reviewed by IMSTEA and once approved, is the official qualification to compete in the challenge.

A short time later, the collaboration turned into an official club, with the hopes and aspirations that it could continue to provide the same opportunity to future students each year.

Oct. 8, was the first official club meeting. Based upon student and instructor schedules, it was decided to hold regular weekly club meetings from 3:30 to 6 p.m. each Wednesday. As time progressed, the meetings increased to include Saturdays each week. The club also worked over fall, winter and spring breaks.

The Super Mileage Club consists of nine students and four instructors. Students put approximately 1,800 manhours into the design and build of the car.

None of it would have been possible without the support of several businesses and individuals that donated money, and/or services: Neier Inc., ECA Enterprises Inc., HopperSlide, Empirical Design LLC, Circle City Bicycles and Gifts, Schaefer's and Ken Nichols Insulation.

The Super Mileage Club would also like to thank Jacob Scobee for all the aluminum welding, Rob Worman for the clear coat and decals, Humphreys' Outdoor Power for the a test fuel tank, and Steve Ray for the many hours spent assisting students during the build process.

Anyone who would like to donate to the club next year may call the Area 30 Career Center at 653-3515.