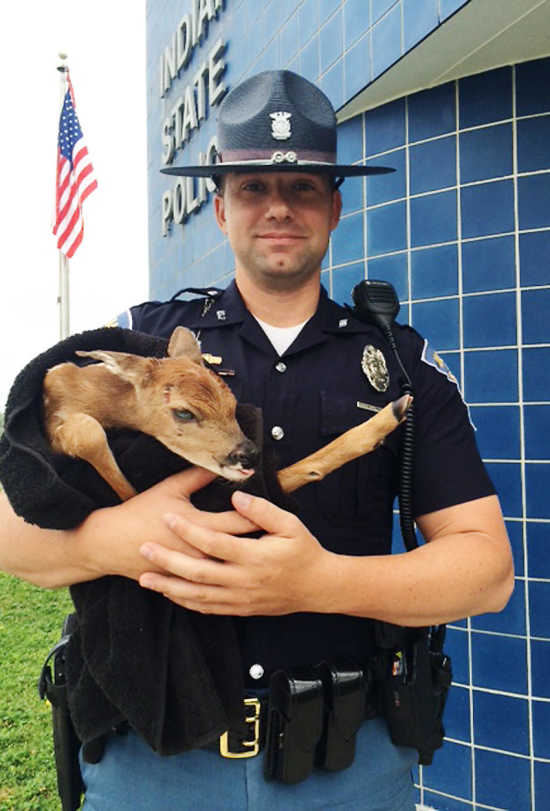 Trooper Mike Wood holds the rescued baby deer in front of the Putnamville Post Saturday before placing the animal in his police commission to transport it to its new home.

But when an officer saves a baby animal, you've got yourself quite a human-interest story.

That is the case today as veteran Putnamville Trooper Mike Wood is being acknowledged for helping to save an hours-old newborn deer from near-certain death in the median of Interstate 70 in eastern Putnam County.

About 9 a.m. Saturday, the Indiana State Police Region III Dispatch Center reportedly began receiving cellular calls from several motorists reporting a "baby deer" in the median of I-70, stuck in a precarious position near the 48.5-mile marker.

Callers reported the deer was alive and appeared to be very young, urging that authorities send someone to check out the situation.

And to that end, Trooper Wood of the Putnamville Post was subsequently dispatched to investigate the scene, seven miles east of Cloverdale.

When Wood arrived, he not only discovered the newborn deer in the interstate median but a dead adult doe -- most likely the mother -- on the shoulder of the roadway.

Appearing to be only hours old, the young deer had what appeared to be part of the birthing process still attached to its body, Wood noted.

"The numerous calls undoubtedly set forth numerous activities which led to the safety of this deer," Trooper Wood said, almost dutifully downplaying his role.

The trooper was able to carefully pick up the deer, placing it in a towel and transporting the animal to the nearby Curtis Wrecker Service at Little Point.

There, wrecker service employees assisted Trooper Wood in wrapping the animal in towels and clothing to keep it warm, while attending to its minor hygiene issues as well.

"It was also heartwarming for all of us to play such a vital role in the health and well being of this animal," Trooper Wood added.

Meanwhile, dispatcher Leesa Slover was busily exchanging several telephone calls with the Indiana Department of Natural Resources and others, trying to locate assistance for the deer. Slover and the DNR were able to locate a Montgomery County animal rehabilitation center that would take in the deer.

Subsequently, Trooper Wood transported the baby deer to a meeting location at U.S. 231 and U.S. 36 in Putnam County, where the young animal was transferred into the custody of Melinda Poole of Waynetown. She is authorized by the Indiana DNR to rehabilitate various wildlife and holds all necessary permits, authorities said.