Hope Haven ahead of game with help of Rose-Hulman 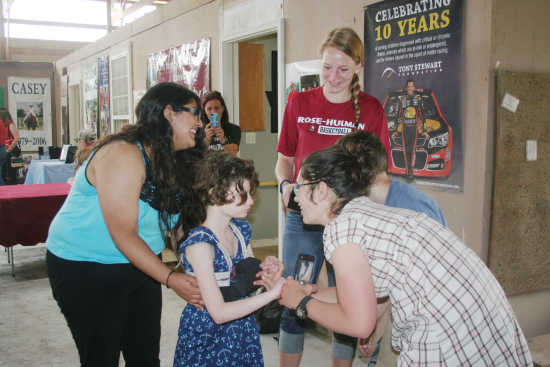 COATESVILLE -- Hope Haven Horse Farm provides therapeutic horse riding for those with special needs in the area, and through the help of Rose-Hulman Institute of Technology the organization will also be able to back up the work with data.

"We are the only ones doing this, and we are actually doing this right here in Putnam County," Menke stressed.

Students from Rose-Hulman visited the horse farm Saturday morning with two new pieces of technology for the farm. This is the third year for the partnership, which was sparked by a former Rose-Hulman student.

Menke deemed Drew Christy, a 2006 South Putnam graduate, the "godfather" of the partnership with Rose-Hulman. In 2008, Christy suffered from a traumatic brain injury on his way home during his sophomore year as a Rose Hulman biomedical engineer student. Christy started visiting Hope Haven in 2012, which sparked the partnership. 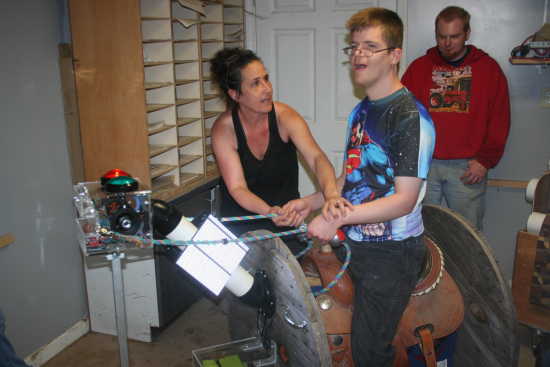 "Drew, his mom and dad introduced us to Rose-Hulmann professors because he had been a student there. They (professors) came down and said, 'We don't know how we are going to help a horse farm.' I said after 15 years of teaching here, let me just rattle some stuff off," Menke recalled. "Their light bulbs went off too, and they took it to the students and that's where the simulator came from."

The first year, Rose-Hulman students Melissa Montgomery, Nicole Richardson and Jaqueline Simpson created the iHorse simulator, which mimics the hip motion and muscle activity in the rider's core mimicking what the person would experience while riding a horse.

Menke said each year since the professors come to her to see what ideas she has to continue providing advanced services to Hope Haven's clients, then those ideas are passed along to the students to meet with the clients, understand the needs and then build the piece of technology for use at Hope Haven.

While new technology was being delivered Saturday, Melissa Montgomery -- one of the original creaters of the iHorse simulator -- came back for a visit with an upgraded version of the mechanism.

As a graduate student, Montgomery revisited the idea of the iHorse simulator, made adjustments to the concept and created a newer version of the project.

"It works with a series of turning mechanisms underneath that raises a platform the person sits on. As it moves, it moves like the horse's walking gait is. The rotating pieces in the back are bigger than the onces in the front because the horse's hips are bigger than its shoulders," Montgomery explained. "As it moves, it has a rolling motion whereas the hobby horse will kind of bounce and jolt. It allows for the hips to open up a little bit better."

In addition, the turning mechanisms in the simulator are now interchangeable, so the device can mimic different sizes of horses and also multiple walking speeds.

"The therapeutic riding industry went under attack recently because we can prove it's beneficial from what we see, but there is no scientific data to back that up," Menke said.

With the use of the simulator and the recently delivered mechanical horse head there will be statistics available to show the benefits of therapeutic riding.

The mechanical horse head, named "Mister Giraffe" by the Rose-Hulman students, not only focuses on rein training, but also provides sound statistics that are downloadable and can be tracked through a spreadsheet.

"The problem that we are addressing is that sometimes the riders don't know how to use the reins properly. When the instructors are trying to teach them the proper technique, they would have (the client) pull on the ropes. It's very qualitative and not efficient," Koustenis explained.

Using randomly generated voice commands, the rein training device teaches the riders how to use the reins properly for turning left, right and stopping. Through the use of a green light for positive feedback and a red light to signify incorrect use, the device will let the rider know whether they are maneuvering correctly.

"It also provides the instructor with some sort of electronic data storage. So that the instructors can track their progress. One of the big issues is that pulling on the reins too hard can hurt the horse with the way the bit is in the mouth. We want to make sure that is avoided and they can have proper technique before they get on the horse so they can maximize their therapeutic riding experience," Koustenis said.

Matthew Lanz, 33, tested the mechanical horse head Saturday morning. Menke stood next to him as the long-time client tried to understand the voice commands and make corrections based on the audio and visual feedback from the device.

After the test run, Lanz said he liked the device. His caretaker, Victor Lowman with Putnam County Comprehensive Services, said he could see right away the benefits of the device.

"I've never seen him so erect in the saddle. It helped with his posture," Lowman said. 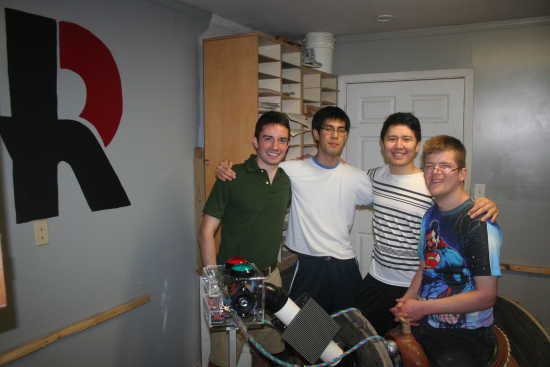 The group worked closely with nine-year-old Rachel Hinton, a former Hope Haven client, who suffers from cerebral palsy, is deaf and is 95 percent blind, according to her mother, Angie.

Gibbs explained the concept for the device and how it worked.

"We built it to help improve communication with our client ... It's really hard for her to communicate information to her. This doesn't rely on the use of sign language or Braille or anything like that. When you press buttons on the remote, corresponding motors on the vest vibrate," Gibbs explained.

The eight buttons on the remote correspond with motor combinations on the vest. She said over time, the motors can begin to represent a command for the client. The device also has a GPS built in.

"Every major has to do a design project, but a lot of those are for corporations or companies where they have to improve a process or save money. But, we get to do improve this person's life," Gibbs said.

Sanchez added, "It was an amazing experience because we do get to communicate with our client. Our client is an amazing person and we fell in love with Rachel the moment we met her."

Rachel's mother Angie was excited about the completed project because communicating with her daughter has been almost impossible. Through her time at Hope Haven, Rachel began making progress because the therapeutic riding instructors were using taps to communicate with her. The family began using taps in their daily lives, such as getting dressed.

Having the vest with the long-range remote has the potential to even further the ability to communicate with Rachel.

"They are amazing. I'm so thankful. It's hard to have a child that doesn't know how to communicate. These people haven given their time and brain power to come up with a solution. It wasn't like they just had this project to get done. They were really interested in trying to find a way to help us out," Angie said. "I feel like we might be on the right path."

She stressed this device has the potential to also help children with autism, who also often struggle with communication and straying from their path.