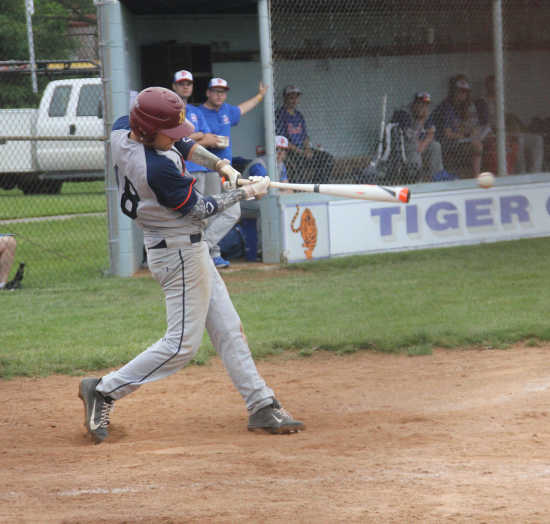 Kaine Benge of North Putnam gets a hit against the Eagles Saturday. (Banner Graphic/JAY LOCKETT) 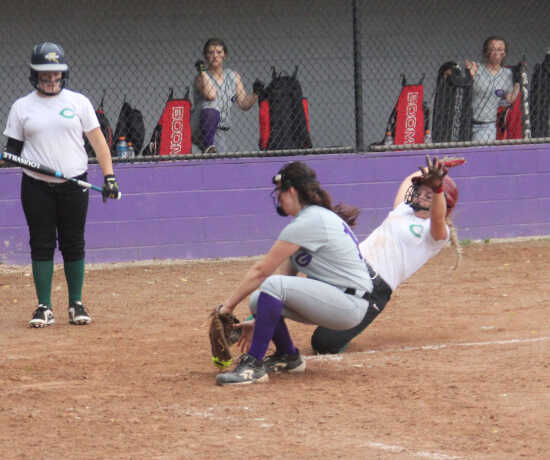 Each game played Saturday was affected by rain, slick balls and muddy fields. Many grounders hit remained planted in the infield.

The North Putnam softball team, having dispatched South Putnam in game one 12- 0, will host Cloverdale, who beat Greencastle 5-3.

The Cougar baseball team found its swing and earned the win against South Putnam 15-4 and the Cougars will play at Greencastle on Thursday, after the Tiger Cubs handled Cloverdale 15-0. 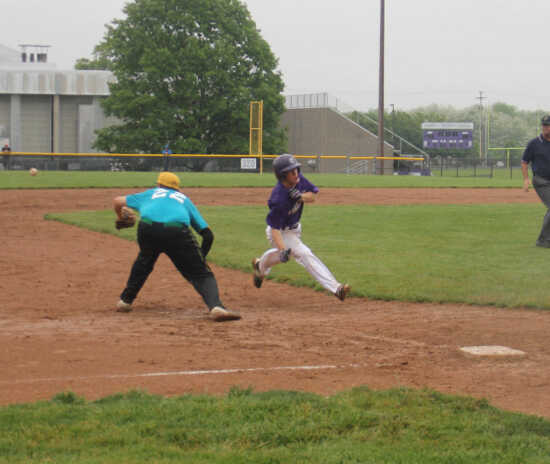 Greencastle's Regan Keller managed to steal her way home after a double but GHS couldn't score again until late in the game when Paige Bragg scored after a single in the fifth. Brynne Shuee also recorded a double that led to a score, but two scores from Jessie Winders and Lauren Meek for CHS put the game out of reach. 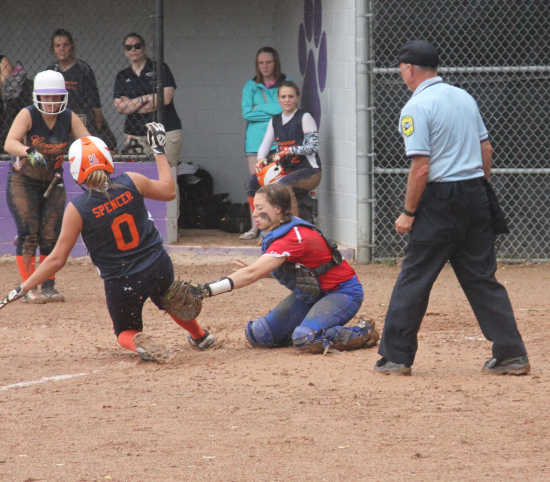 North Putnam's Sabrina Surber and Rielly Tucker held the Lady Eagles' softball team at bay to earn the win but it did not stop South Putnam from swinging the bat.

Ten runs in the second inning from the Lady Cougars were enough to do the job despite not scoring after two innings.

The Eagles played great defense during the tail end of the game and although a deep shot to right field by Katie Hewitt looked like it might've given the Eagles a homer, the offense never managed gain momentum.

"I think our strength right now is our defense," SPHS coach Roshia Sullivan. "We're playing our best ball right now. We've just got to get our offense going and it'll get there. It just wasn't here today."

The Greencastle baseball team benefited from the seven strikeouts Tanner Nicholson provided and some errors by CHS.

The Clover baseball team is looking forward to a better showing, as they will have two cracks against GHS on Monday and Tuesday.

"I thought Brayden White pitched well today," CHS coach Jarrod Duff said. "In what was not ideal conditions he pitched well enough for us to win. In the fourth we gave them six outs. When you give a team six outs in an inning obviously it gives them more opportunities to score."

South Putnam's baseball team was in the running with the Cougars but a seven-run fifth put the Eagles in a hole and North Putnam never turned off the gas.

North Putnam gained control toward the end against South Putnam. It was tied in the third inning at two before the Cougars scored two runs in the fourth.

Carmichael then hit a homer for South Putnam in the bottom of the fourth and Taylor Bush scored the final run for the Eagles.

RBIs from Cameron Mcpherson, who had three, Jacob Berry, who had two, and Kyler Jeter contributed to the big lead that North developed at the end of the game.

"We kind of talked about it as a team after the game," Eagle coach Zach Love said. "We are only guaranteed three more games. How we respond and bounce back will determine how long we keep playing baseball this year."