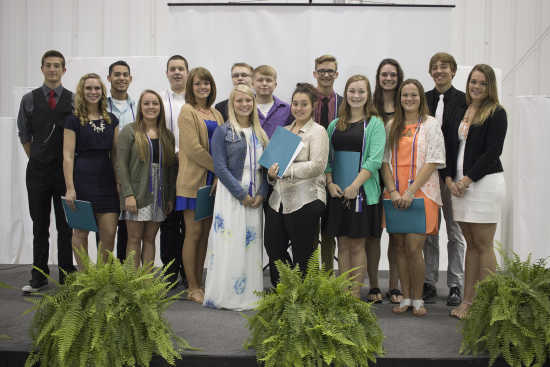 On Wednesday, May 13, Area 30 Career Center held its Annual Senior Awards Program to recognize student accomplishments in its Career and Technical Education programs.

Top honors went to Dakota Evans, a South Putnam student in the Law Enforcement program. Evans will be serving in the United States Marine Corps while taking online classes to receive an Associate's Degree. Evans also received the Jim Baugh Memorial Scholarship from the Putnam County Fraternal Order of Police.

From the EMT program, South Putnam student Courtney Sullivan was recognized with an award to attend IUPUI to study nursing. From the Automotive Collision program, a Greencastle student, Trinten Stewart, earned award honors and will be entering the work force.

Marlee Nichols, a Greencastle student, who has been in both the Nursing and Health Careers programs, earned an award to study nursing at IUPUI. Jason Inglert, from the Teacher Education program, will be using his award to go to IUPUI to study Social Studies-Secondary Education.

North Putnam student Shay Lucas, from the Nursing and Health Career programs earned an award to study nursing at IUPUI. From the Engineering program, Levi Lewis, a Greencastle student, will be using his award to attend the IU Kelley School of Business. Thomas Hunt, a Computer Systems Networking student who attends Greencastle, was given an award to study information technology at Ivy Tech.

Area 30 Career Center is able to grant awards each year to deserving students thanks to the generous donations from many local business and individuals who support Area 30 students by contributing to the Award Fund and/or by participating in the Area 30 Golf Outing.