"Make your vote count!" That notion has been excellent election advice since the dawn of the voting process.

A practice older than Uncle Sam and the Declaration of Independence combined, voting basically has been in vogue since the sixth century BC when the Athenians (no, not from Crawfordsville) introduced a democracy.

Making your vote count has been easier said than done at times, and more costly than expected on other occasions. 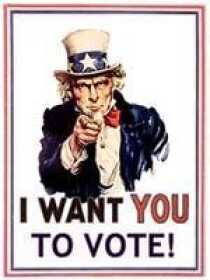 Those who made their vote count in the city primary this May represented a mere 10.5 percent of all registered Greencastle voters.

In a primary that came up seriously shy on contested races (one for each party), the recent election understandably motivated few voters -- actually 696 of the city's 6,623 registered voters -- to go to the polls on May 5.

The cost of that venture wasn't lost on city officials as Clerk-Treasurer Lynda Dunbar's report at the May Greencastle City Council meeting showed the 2015 primary costing the city $17,015 to conduct.

That computes to approximately $25 per ballot cast.

"That's quite a bit per vote," one official was heard saying.

True. Chicago and Atlantic City elections have probably been bought for less than that per vote.

Nonetheless, the Greencastle primary was funded 100 percent by the city, Dunbar said, anticipating a similar cost for the far-better-contested general election scheduled for Nov. 3.

In the general election, the total cost of expenses will be split between the city and the smaller Putnam County towns also conducting elections.

"The cost will be something close to this figure again," Dunbar predicted.

According to statewide figures released this week by Indiana Secretary of State Connie Lawson (the longtime former state senator who represented a major portion of Putnam County), the Greencastle turnout was pretty typical of the voter showing across Indiana. Figures show 15 Hoosier counties saw fewer than 10 percent going to the polls.

The worst voter turnout came in Tippecanoe County where when all the returns were in, a paltry four percent of voters cast ballots.

Meanwhile, the best showing at the polls came in Starke County at 33.7 percent, more than three times the Greencastle turnout.

As it turns out, Greencastle's voting percentage tied with Miami County for 18th-worst among the 72 counties that conducted a primary election this spring.

The voter report was compiled by the Election Division of the Secretary of State's office from data collected in 72 of Indiana's 92 counties. Twenty counties in Indiana did not have a primary election this year, including nearby Owen and Parke counties.

Among other neighboring counties, Clay County had the lowest figure with only 8.1 percent voter turnout, while Montgomery had 14.8 percent and Morgan totaled 22.1 percent.

"I hope to see more counties have a higher turnout rate this fall," Secretary of State Lawson responded. "To encourage this, my office will conduct an unprecedented municipal election voter outreach campaign to remind Hoosiers to register to vote and to vote this fall."

Meanwhile, the 2015 primary saw an increase in the use of cost-saving vote centers across the state. Bartholomew, Clinton and Huntington counties used such voter centers for the first time.

As a state senator, Secretary Lawson authored legislation offering counties the option to establish vote centers, which have the potential to significantly improve efficiency and reduce county election costs. Vote centers consolidate multiple precincts into a single location, enabling counties to save on costs associated with hiring poll workers and purchasing voting machines and supplies.

In other words, all eight Greencastle precincts could have voted at one centralized location had voter centers been approved locally.

During the off-election year in 2013, Lawson conducted informational meetings for Hoosier county election officials to educate them on the benefits of vote centers.

"The savings to taxpayers and the increased flexibility for voters are significant," she said, "and I hope that counties who feel this is the best choice for their citizens will choose to follow suit."

The voter center idea has at least been mentioned at a recent Putnam County Board of Commissioners meeting, although no action has been initiated to investigate the possibility.