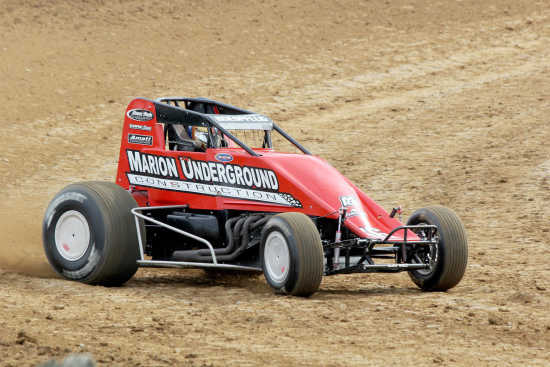 Chad Boespflug is on the throttle during his heat race at Lincoln Park Speedway Saturday night. Boespflug would later pick up the sprint car feature victory for the Amati Racing team. (Banner Graphic/JAY LOCKETT)

PUTNAMVILLE -- After a long wet week in Indiana, the rains finally subsided long enough to get an evening of racing in at Lincoln Park Speedway.

A pair of national points leaders extended their 2015 leads with wins on Saturday evening as Devin Gilpin recorded the UMP Modified victory and Tyler Cain finished the night in victory lane after the UMP Super Stock A-main. A.J. Smith won a battle in the bomber feature for his first win of 2015 and California native Chad Boespflug put the Amati Racing Team in the winner's circle after the 25-lap sprint car feature.

Boespflug and the Amati crew celebrated on the front stretch of Lincoln Park Speedway in a party that even a full week of rain couldn't extinguish.

Boespflug held off multiple charges from Shane Cottle and eventually Brady Short who each spent time in dogged pursuit.

After getting past JJ Hughes over the opening laps, Boespflug and Cottle were the top runners. Short joined the fray after starting sixth, but quickly moved into the top group alongside Cottle.

Early cautions gave Cottle a shot at the lead, but Boespflug was able to pull away after the restart. Brent Beauchamp started in the 10th spot, but last week's LPS victor made short work of some traffic to climb into quick contention. He would battle wheel-to-wheel with CJ Leary through the middle stages of the feature as Jake Hodges and Hughes were fighting for sixth. With Boespflug out front, Cottle was charged with fending off Brady Short and a wheel-to-wheel fight for fourth between CJ Leary and Brent Beauchamp.

As the laps ticked off, Boespflug had the hammer down running the cushion as Cottle and Short attempted to reel him in to no avail. On lap 20, Short dove to the bottom to take the second spot. He set his sights on catching Boespflug over the final circuits, but couldn't gain enough ground as the checkers flew for the Amati squad and the Marion Underground sponsored No. 66. Short, Cottle, Hodges and Beauchamp rounded out the top-five spots.

"Thank you Shane Wade, owner of Amati Racing Inc, for the opportunity to drive for you without bringing anything more than my helmet bag every night," Boespflug said afterwards. "Doing it the way Grandpa Chuck would have liked it."

After a week of continuing showers, the national reign of both Gilpin and Cain was furthered as each driver found their way to victory at Lincoln Park

Gilpin had an early challenge from Kentucky's Grant Black before he got to the lead in the UMP Modified main event. The A-main was the opening feature of the night and the Columbus, Ind. native wasted little time in making his way to the front.

Lapped traffic came into play by the midway point of the feature, but Gilpin was able to build his lead over Black as Roy Bruce Jr. held third followed by Richie Lex. Dan Lewellen and Jay Humphrey were in the top-five mix followed by Derek Groomer and Jacoby Hines.

With five laps left, Gilpin had run out to a comfortable margin as Bruce had taken the second spot ahead of Black with Lewellen, Humphrey and Hines. A caution re-set the field with four laps remaining, but Gilpin wouldn't be denied another victory as he charged away from Bruce to pick up the victory. Black, Lewellen and Lex rounded out the top-five.

In the super stock feature, Doug McCullough started on the pole alongside Cain followed by Kris Starks and Josh Boller. As the field went green, Cain leapt to the point as McCullough and Boller duked it out door-to-door for second ahead of Steve Peeden, Kenny Carmichael Jr. and Starks. Cain slowly built on to his lead over the course of the 20-lap feature as McCullough fought off late challenges from Peeden and Boller as Joe Godsey moved up to finish fifth overall. The victory was Cain's 10th of the season.

Eric Miller and Josh Settles started at the front of the 29-car bomber feature when the field took the opening green flag. Smith would make a quick move into second and would battle Settles for that spot over the first nine laps of the race. Smith was able to get under Settles on lap-10 for the lead as RJ Pruitt made a move to get to third ahead of Cody Wright and Tim Wright.

Settles would give Smith all he had down the stretch, but was unable to get to the front at the checkered flag. Pruitt finished in the third spot ahead of Jordan Almanza. Tim Wright pulled off the track late as Almanza placed fourth with Cody Wright in fifth.

The final A-main of the evening went to Lynn Ambrose as he led wire-to-wire to capture the Midwest Mini Sprint Association feature.