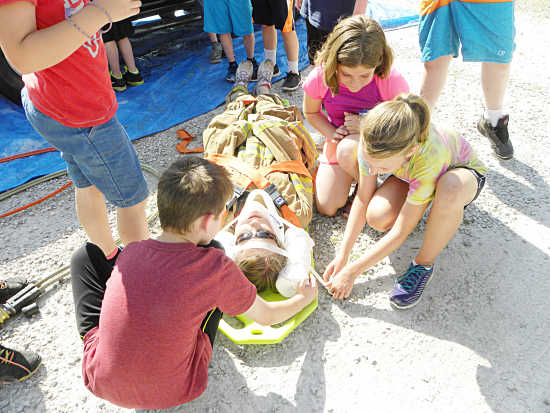 Bryce Smith, Lauren Elam and Carly Simmons learn how to carefully place a patient on a backboard during the Roachdale Fire Department's camp recently. Along with teaching safety, the department demonstrated the skills it takes to be a firefighter. (Courtesy photo)

ROACHDALE -- The Roachdale Volunteer Fire Department welcomed a group of 27 local students to learn what it means to be a firefighter recently.

Lt. Heath Kerns said the first-time firefighter camp was open to third through fifth-graders in Roachdale. The two-day camp gave students real world experience and allowed them to learn hands-on what being a firefighter means.

"I was inspired by my son, who is 10. My dad was a firefighter too, so I was always curious what he did. During the school year, Chief (Mike) Poole, myself and some of the other guys go out to the school, but there is never enough time," Kerns explained about the idea for the camp. 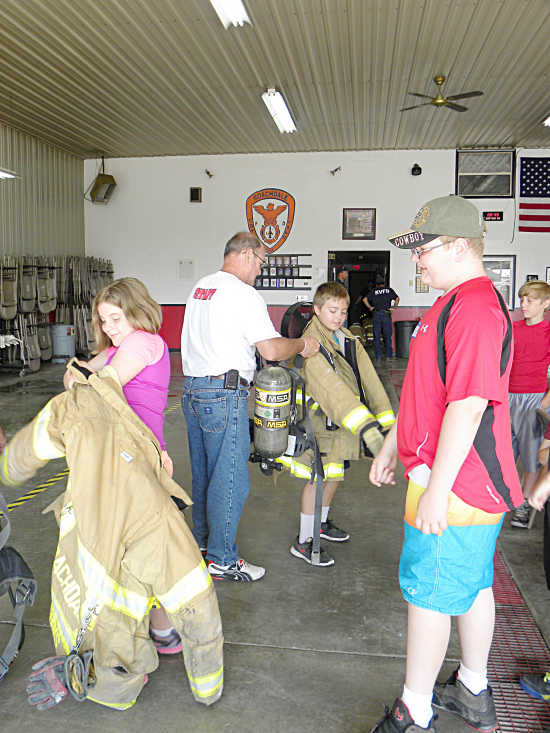 He reached out to the Carmel Fire Department, which hosts an annual camp similar to Kerns' idea and provided him the information needed to get the camp started.

On June 6, the students visited the fire department for an introduction to fire department and EMT duties at various stations. The students learned about placing a patient on a backboard and loading into an ambulance. The rescue station showed the students how to put on turnout gear and demonstrated the weight and how hot the extra layers were before even entering a burning building.

A wooden wall with a flame cutout was the target for the youth who learned to roll out a hose, hook it up to a fire hydrant and attempt to put out the faux fire. The students got to hold on to the Jaws of Life, and use the device to cut a pipe.

Kerns said most importantly the students learned about calling 911, keeping calm while on the phone with a dispatcher and creating a fire safety plan for their families.

The second day of the camp, June 13, was the day the students were able to put their knowledge to the test.

A mock accident was set up. The children had to quickly get into the turnout gear and start with safety checks, including checking for downed power lines and looking for oncoming traffic. Working as an EMT in the mock accident, students learned to speak to the patient, keep them calm and ultimately transport the patient into an ambulance.

"We put them in the ambulance to see how bumpy the ride is," Kerns noted. 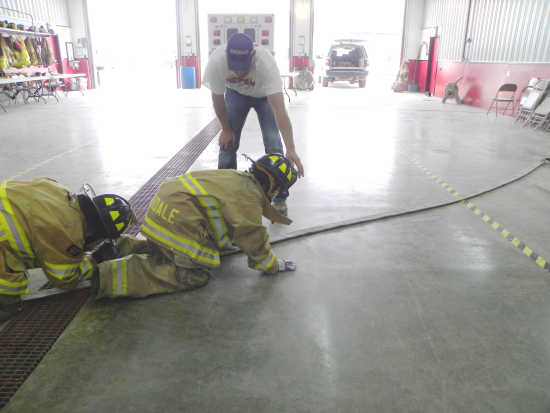 Lt. Nick Burdine helps guide Caleb Rees (right) and Jacob Riddle as they learned how to follow a fire hose out of a building engulfed in smoke while in full turnout gear. (Courtesy photo)

"We set some pallets on fire and they got to put out a real fire," Kerns said of another mock incident.

Kerns said the department wanted to stress the importance of safety and teamwork, as well as working with the students to show them the firefighters are just regular people as well.

"It was good for us to build a relationship. Tell them don't be afraid and if you have to call (911), be relaxed," Kerns said. "A lot of the kids didn't know how hot it would be and how smoky it would be. Like, in 'Chicago Fire,' you see all the fire, but never the smoke."

The students who participated in the event asked good questions and paid attention to the presentations, Kerns said. He added the volunteers were even able to learn a little from the youth.

Area businesses also helped to make the event possible, including the Greencastle Kroger, Greencastle Walmart, Firehouse Subs and the Casey's in Roachdale. The department was able to provide food, drinks, T-shirts and backpacks for the participants.

Kerns said he hopes the event continues to grow each year. Bainbridge Volunteer Fire Department has already reached out to learn more about getting involved. 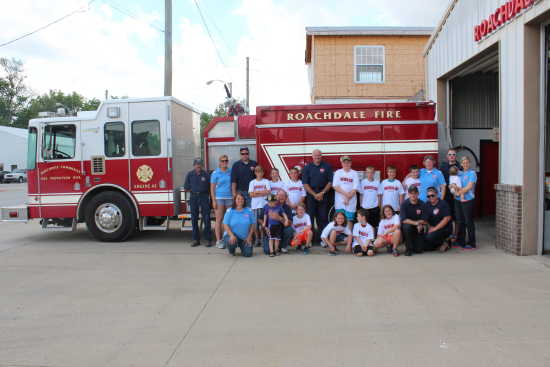