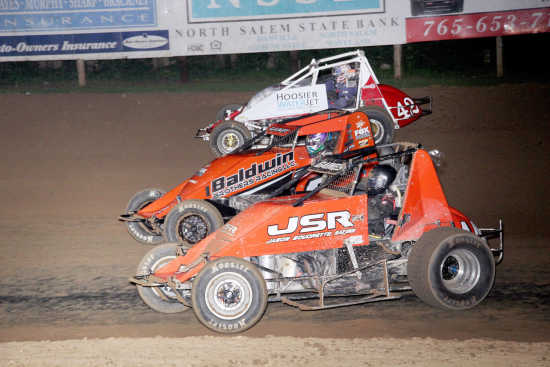 CJ Leary (center) dives between the lapped cars of Conner Donelson (No. 42) and Dickie Gaines during his dominant feature victory on Saturday night. Leary lapped up to the fifth-place car while scoring his first sprint car win of the year. (Banner Graphic/CAREY FOX)

PUTNAMVILLE -- A night of thrill packed racing Saturday evening at Lincoln Park Speedway provided the perfect kick off to a week highlighted by Independence Day on Friday.

The Putnamville oval played host to a trio of first time winners as CJ Leary (sprint cars), Jay Humphrey Jr. (modifieds) and RJ Pruitt (bombers) reached victory lane. For Pruitt and Humphrey, the victories were the first of their careers.

Humphrey's was perhaps the most exciting finish, certainly the scariest of the night, as managed to cross the finish line first in a tangle of cars that included his brother Jake getting upside down as the checkered flag flew. 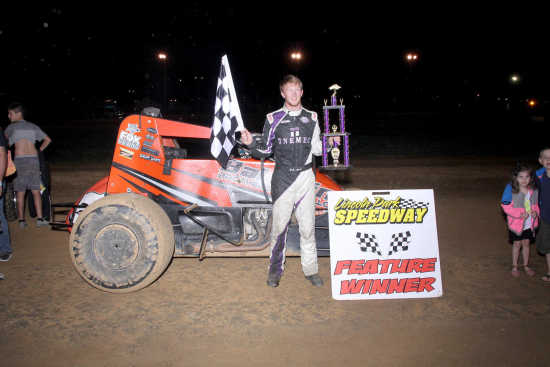 CJ Leary (center) dives between the lapped cars of Conner Donelson (No. 42) and Dickie Gaines on his way to a dominating sprint car feature win. Leary lapped up to the fifth-place car while recording the win. (Banner Graphic/JAY LOCKETT)

The UMP Modified main event kept the crowd on edge as Humphrey started on the inside of the front row and stayed out front ahead of Dan Lewellen early on. Jake Humphrey quickly moved forward from the sixth starting spot to challenge for the third spot as Jordan Wever, Randy Shuman and Kenny Carmichael Sr. gave chase.

Humphrey worked the bottom of the track masterfully as Lewellen looked for an opening, but it was Jake Humphrey that was riding roughshod along the extreme high side of the track on a thrill-a-minute ride. He was able to slowly eat into the leaders' advantage until he pulled alongside Lewellen for several laps with Shuman slightly behind them at the mid-point of the race. By lap 15, the Humphrey brothers were battling to the wire, Jake up top, Jay on the bottom. The pair, along with Lewellen entered heavy lapped traffic over the final few laps of the A-main. Jay managed to hold on to his lead while going three-wide down the front stretch to take the white flag. A blanket could have gone over the top-three places, along with several more lapped cars, as the lead pack headed into the final two corners.

Jake Humphrey moved off the top line and made his move to the middle alongside Jay, but got squeezed between a lapped car and his brother. Jake would take the brunt of the accident as his No. 77H made contact with the wall and rolled. Meanwhile, Jay jumped the front of the lapped car as he crossed the finish line and bounced heavily into the infield. Lewellen crossed in second, but his car didn't go unscathed either. Carmichael Sr. made it to third ahead of Jake Humphrey and Wever. 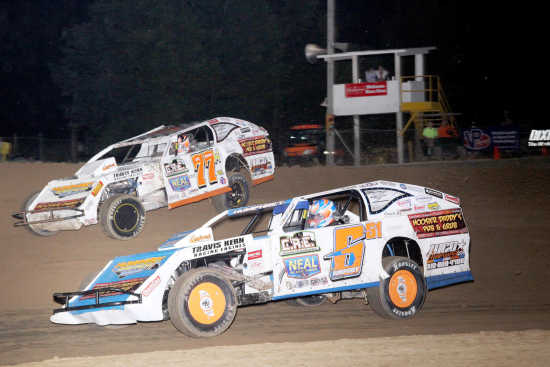 Jay Humphrey Jr. (No. 661) and Jake Humphrey (No. 77H) battled each other over the final few laps before a wild finish that saw Jake upside down at the finish line. Jay was able to record his first career feature win. (Banner Graphic/CAREY FOX)

After some tense moments as his car was rolled back on to its four wheels, Jake Humphrey emerged sore, but uninjured in the accident.

Leary had a much easier time of his A-main in the sprint car division as the Greenfield, Ind. native got past Conner Donelson on the third lap and lit the wick on his No. 5 rocket ship.

Once he was able to get by Donelson, Leary simply dominated in the Baldwin Bros., Fox Paving sponsored sprinter. As the laps ticked off, Leary would eventually lap all the way up to fifth-place and finished the better part of a straightaway ahead of runner-up Thomas Meseraull. Jarrett Andretti advanced up to finish third after starting 10th. AJ Hopkins and Casey Shuman were in the top-five and Dickie Gaines was the hardest charger, moving up from 18th to take sixth.

Martinsville, Ind. driver Steve Peeden, got the season started late while getting a new car put together, but he added his third win of the year on Saturday night in the UMP Super Stock division.

Peeden battled bast Josh Boller early and then kept Brazil's Larry Raines behind him over the last half of the race. Raines had his hands full with Boller's attempt to take the second spot, but completed a second-place run. Doug McCullough moved up from eighth to finish fourth and James Walters powered forward from 12th to take the fifth spot.

Pruitt started his night off right with a heat race win and he finished exactly where he started. In first place.

The Terre Haute driver had to chase down Ryan Freeland, who led the entire race, except the final one. Pruitt made the pass coming out of turn four and outraced Freeland to the checkered flag to pick up his first career feature victory. Freeland took down the second spot ahead of David Wallen as Dustin Colvin and Jordan Almanza placed in the top-five after 27 cars took the green flag.

This weekend will feature the Midwest Sprint Car Series on Friday and the USAC National Sprint Cars on Saturday for the First Bill Gardner Sprintacular.