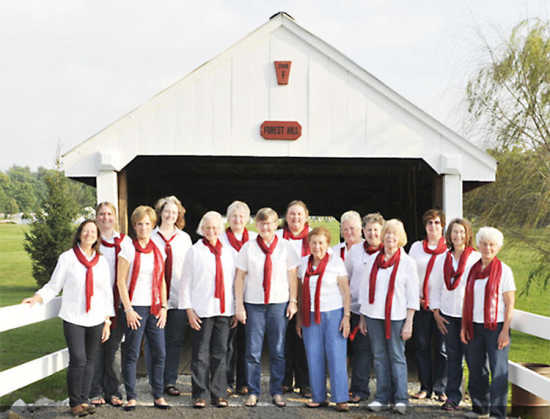 The Tuesday, June 30 edition of ParkFest will feature a pair of longtime acts at the free summer concert series sponsored by the Greencastle Civic League.

The 6:30 p.m. show will kick off with the Fret Set Band, followed by Covered Bridge Harmony.

This week's food vendor will be Anthony's Pizza.

The Fret Set Band is a group of friends who enjoy making old-time music and sharing it with others. The band is celebrating its 21st year together.

The songs include traditional and contemporary folk music.

Covered Bridge Harmony, a woman's a cappella singing group, was founded in January 2003. The group is a part of Area 4 in Harmony Inc., an international organization for women barbershoppers.

Area 4 includes more than 20 states as well as parts of Canada. The chorus has competed in 12 area competitions and were the Area 4 champions in 2010. They have qualified for and competed in nine Harmony Inc. international competitions.

Covered Bridge enjoys presenting shows locally and singing with its sister chorus in the Indianapolis area. The group has performed for people in Terre Haute, Staunton, Fincastle, Monrovia, and Indianapolis as well as taking part in Greencastle's Parkfest , Fourth of July celebration and Airport Appreciation Days.

The chorus was honored by being included on the CD made for the Putnam County Museum's fundraiser three years ago.

Perhaps the group's biggest excitement came when it was asked to sing the National Anthem before the Colts game on Dec. 31, 2006 and its biggest honor was being asked to sing at the last reunion of the survivors from the USS Indianapolis.

Covered Bridge has great fun singing for the residents at the local nursing homes throughout the year. Its members come from Putnam, Clay, Hendricks and Hamilton counties.

Coming ParkFest performers and vendors include: