The 54th season of Putnam County Playhouse continues with a production of "The Bad Seed."

The thriller will be presented July 9-11 and July 15-18 at the Hazel Day Longden Theatre off Round Barn Road in Greencastle. All performances begin at 8 p.m. 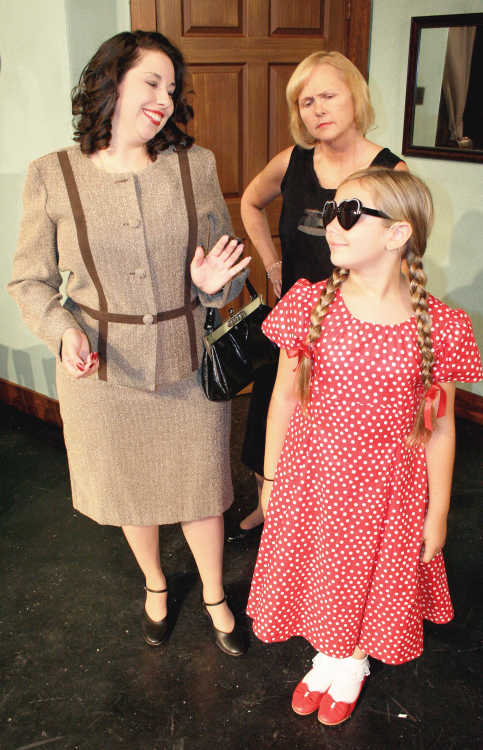 Radiant in her new sunglasses, Rhoda (played by Sonora Erwin) gets conflicting reactions from Monica (Ashlee Vitz, left), who gave the shades to her, and Christine (Bethany Bax) in a scene from the Putnam County Playhouse production of "The Bad Seed." Opening Thursday, the drama continues this Friday and Saturday and again July 15-18 with 8 p.m. performances on the Hazel Day Longden Theatre stage off Round Barn Road in Greencastle. ERIC BERNSEE
Order this photo

It is being sponsored by Rossok & Co. -- Pekin Insurance.

The Tony-Award-winning play by Maxwell Anderson was first presented on Broadway in 1954 and was filmed in 1956.

Lighting is by Dustin Bond and set design by Linda Gjesvold. The technical crew includes Cecily Girton running the sound board and Cameron Wunderlich operating the light board.

Bethany Bax stars as Christine Penmark, a mother who makes a shocking discovery about her own life and how it affects her daughter Rhoda, played by Sonora Erwin. Christine begins to realize just who is responsible for a child's death as secrets about her own past are revealed to her.

Bax most recently appeared at PCPH in "The Curious Savage." Sonora has appeared in the ensemble in two shows, but this is her first leading part at PCPH.

The helpful -- at times -- neighbors Monica and her brother Emory are played by Ashley Anne Vitz and Clarence Long. Mr. and Mrs. Daigle, a pair of grieving parents, are portrayed by Allison Creekmore (making her Playhouse debut) and Bob Jefferson. Vitz most recently appeared at PCPH as Adelaide in "Guys & Dolls." Long was in the same show playing Big Julie. Jefferson appeared last season in "The Man Who Came to Dinner."

Kathryn Dory plays the owner of the local private school, and Dustin Boothby (making his PCPH debut) is Leroy the handyman. TJ Tincher is Kenneth Penmark, Christine's husband and is also production stage manager. Brandon Wunderlich is the messenger and assistant stage manager.

Sutton is a past president of PCPH, and he has appeared in such shows as "All My Sons" and "The Fantasticks." Zerkel most recently appeared in "Harvey." Dory was in "The Curious Savage." Tincher was seen as one of the brothers in last month's show, "Seven Brides for Seven Brothers."

The season continues in August with a production of Stephen Sondheim's musical "Into the Woods."