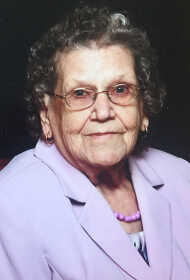 She was born on April 8, 1924 to Clarence and Elsie Holloway Barger at Martinsville, Ind.

Maxine was a member of the New Life Baptist Church at Browns Valley and the Home Ec Club at Russellville. She worked as a nurse's aide at Parke County Nursing Home for years and then took care of patients in their homes. She also operated Browns Coffee Cup Café at Russellville from 1976-1978.

She was preceded in death by one son, Norman Goss; one grandson; one stepson, Phillip Brown; a stepson-in-law, Alvin Trinkle, four brothers and one sister.

Funeral services will be conducted at Machledt & Servies Funeral Home at Waveland on Tuesday, July 14 at 11 a.m.

Friends may greet the family on Monday from 6-8 p.m. at the funeral home.