Visitor arrested for trafficking at Putnamville 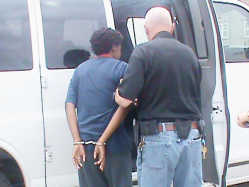 PUTNAMVILLE -- A visitor was arrested Sunday afternoon during a visit at Putnamville Correctional Facility.

Kristin Stepp, 20, Indianapolis, was interviewed and later taken to Putnam County Jail after being caught handing off a controlled substance to an offender.

While Stepp was visiting with her friend, offender Noah Vanhorn, prison officials observed Stepp remove an object from her pants and place it inside a snack bag on the small table that separated them.

The maneuver was witnessed and verified by a shift supervisor, who was able to watch the visit on camera.

Two sergeants responded to the visiting room, secured offender Vanhorn and ended the visit, bringing the offender to a nearby area to be searched.

Another sergeant secured the evidence that was still on the table in the snack bag. Inside the snack bag that was on the table was another plastic bag containing individually wrapped bags of a green leafy substance which tested positive for marijuana and THC.

Stepp was escorted to a different area by female staff to wait for Correctional Police Officer David Wire to interview her. She was subsequently taken to the jail for processing.

She was booked in at 1:50 p.m., charged with Level 5 felony trafficking with an offender.

"We would like to thank our staff for their quick response and diligence," PCF Superintendent Brian Smith said. "We are pleased that the officers were able to prevent these illegal drugs from coming into the facility."

Vanhorn, 20, from Indianapolis, is currently serving sentences for two counts of burglary with a release date of May 9, 2017. He has been placed in the administrative restricted housing unit and could face other criminal charges pending the outcome of the investigation.