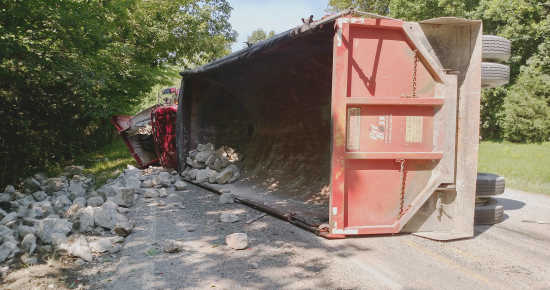 The State Road 243 roadway was closed for crash investigation and clean-up until approximately 1:20 p.m.

Preliminary investigation revealed a 2007 International tractor, pulling a dump trailer loaded with aggregate, driven by Paul E. Rideout of Kansas, Ill., was southbound on SR 243, lost control and rolled over.

Rideout was transported by Putnam County Operation Life paramedics to Putnam County Hospital for treatment of what was believed to be non-life threatening injuries to his face and shoulder.

Information from the driver and evidence at the scene suggest the 2007 International experienced a mechanical malfunction related to the steering, which appeared to cause the crash.

Owner of the truck is Jon Wood Trucking of Paris, Ill.