For the past five or six years, local auctioneer Jeff Rich has helped put the "fun" in Family Fun Day at the Putnam County Fair by sweet-talking, teasing and otherwise cajoling bidders into becoming buyers in the annual Purse Auction.

The day-ending event, which began back when the program was still called "Ladies' Day" at the fair, has annually raised funds for building maintenance and display needs.

Showing off the kitty purse he was presented at the conclusion of the Family Fun Day purse auction Wednesday afternoon, Jeff Rich strikes a pose on the stage in the Exhibit Hall on the fairgrounds.

Wednesday afternoon, it raised emotions to a new level.

Oh sure, Rich had his usual run of repartee, trying to prod husbands into shelling out big bucks for some of the various themed purses sponsored by home extension clubs and packed with gifts cards, gift certificates, appropriate novelties and even cash. Or teasing Jennifer Romalia about her often-spiked baking recipes. And even picking on poor Jake Robertson, who Rich kidded about being able to get 15 dates with the contents of one of the purses.

As the bidding for that bag hit $90, Rich paused and did the math for Robertson, announcing, "That's $6 a date."

When the laughter died down and Robertson had indeed provided the winning bid, Rich assembled 15 single women on stage to pose for a photo with Robertson and his purse.

But the last laugh was on Rich.

As the final handbag of the afternoon -- a pinkish kitty purse (no, not Hello Kitty) -- went up for bid, the spirited and immediate response amazed and surprised the personable veteran auctioneer. Dollar totals soared like they were bidding on a Picasso, not a purse.

"Where's this money coming from?" Rich asked as the bids kept coming. "I wish someone had let me in on this."

Turns out the purse was created specially for Rich, filled with greeting cards, notes, gift cards and cash from many of the home extension clubs that have benefited from his generous donation of his time and talents since the inception of the purse auction.

"I was 'got,'" Rich admitted of the surprise.

That was precisely the point, the Robertsons suggested.

"He has a big heart," Kelly Robertson said of Rich, "and he almost lost his."

Rich suffered a serious heart attack last December, he said, still choked with emotion at how many of the Extension Homemaker friends he has made over the years sent him well wishes and more during his recovery. 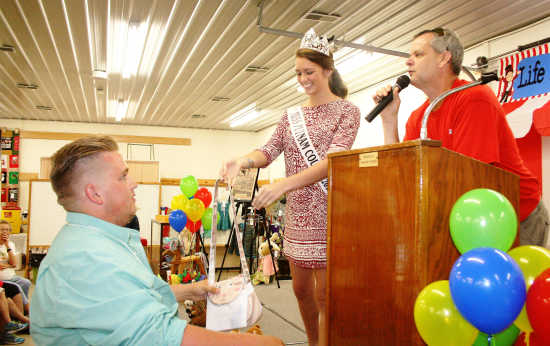 "I will cherish this the rest of my life," Rich assured Wednesday, reading a couple of the greeting cards included in the kitty purse as he stood transfixed at the podium in the fairgrounds Exhibit Hall.

One of the cards he shared read, "Thanks for making us laugh all these years."

"I am speechless," he said, "you got that right. This is the quietest you've ever heard me."

And he got quiet again, leafing through the contents of the purse before stopping to admire a gift card for dinner at St. Elmo's in Indianapolis.

All Rich could do was shake his head at the outpouring of thoughtfulness and sincerity.

"Thank you from the bottom of my heart," he added. "I love you all."