Unlike many folks who are involved in the annual county fair, Shelly Tahtinen didn't grow up in Putnam County.

But the Putnam County Fair sure grew on her.

And Wednesday, while just a visitor to the fair for the first time in years, the surprised Tahtinen was named the 2015 Spirit of the Fair Award winner as part of Family Fun Day festivities. 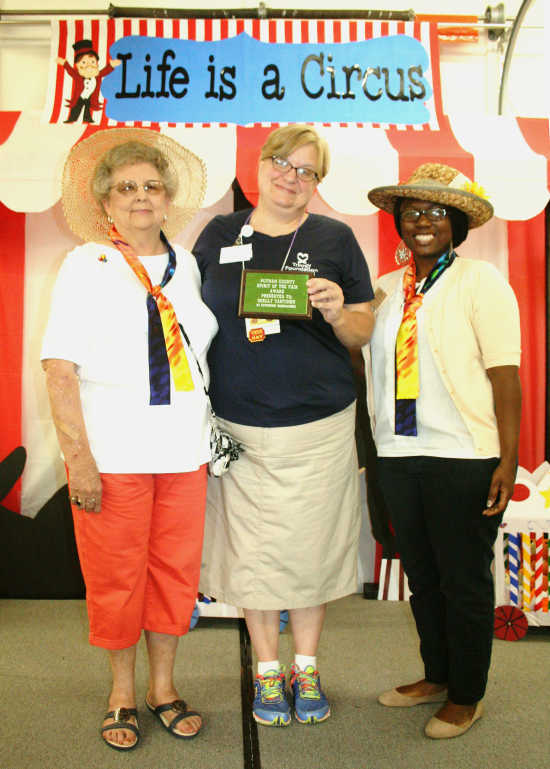 During the annual Family Fun Day program Wednesday at the Putnam County Fair, Shelly Tahtinen (center) was named the 2015 Spirit of the Fair Award winner. Presenting the award are Sharon Baldwin (left), president of Putnam County Homemakers, and Putnam County Extension Educator Jennifer Cannon. The Spirit of the Fair Award is given annually to an individual, business or organization for outstanding support, participation and enthusiasm in the Adult Open Class Exhibit.

"We're transplants to Putnam County," Tahtinen explained as the audience dispersed for lunch after the morning program with the theme "Life is a Circus."

"It's been nine years now," Tahtinen added. "What makes this place so special is, the first thing that anyone asked me to do was to come and help with the fair.

"That's when I really felt like we belonged here. I really enjoyed it."

So much so that Tahtinen was back at the fair Wednesday, even though she now has a fulltime job at Mill Pond Health Campus and brought a group of residents for the Family Fun Day program.

The time constraints of that fulltime job are what forced Tahtinen to give up her role as Adult Open Class superintendent at the fair, a position she had held for two years in the aftermath of Geneva Dorris' retirement.

When Tahtinen's husband Gary retired, she explained, she took on the fulltime job.

So does she miss the county fair involvement?

"I do," she assured. "I've thought a lot about that, especially the last two weeks. It was always a two-week fair for us with setting up and all.

However, she admitted the fair had been on her mind.

"I've been calling friends, asking if everything was going well," she said. "Of course, I knew it was."

The afternoon portion of the program included remarks by author and Quaker minister Phil Gulley, a Danville native who has written and published 20 books, including the "Porch Talks Series."

"July was our high-water mark," Gulley reminisced in a humorous monologue about growing up in Hendricks County and awaiting the annual fair.

The first week of July each summer of his youth, the Poor Jack Carnival came to the square in Danville, he recalled, followed by the 4-H Fair on the east edge of town.

While most of Danville, including his mother, lived in fear of the carnies who came with those ventures, Gulley said he and his friend Peanut often dreamed of the carny life.

"Once in a while we would dream of being carnies," he said, "drifting from town to town, never bathing, getting tattoos, blowing smoke rings ..."

His parents would frown on that, Gulley said, unless he "married the Wild Girl from Borneo and had little carny babies."

Churches, meanwhile, were divided on the issue of carnies in their midst, Gulley reminisced. 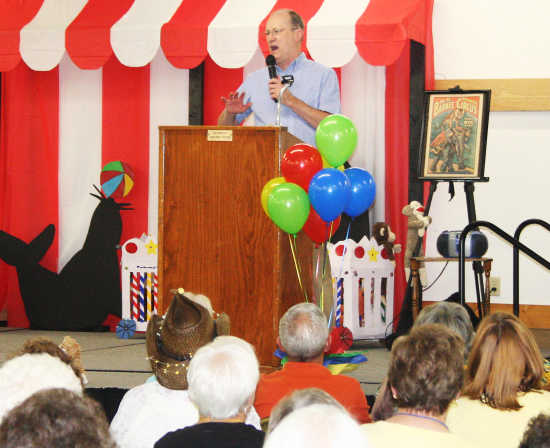 Author Philip Gulley reminisces about growing up in Danville and awaiting the arrival of the carnival and the fair.

The Church of Christ used the carnival and circus to its advantage, he said, soliciting the names of residents who might like a visit from representatives of the church. He and Peanut would fill out all those forms they could get their hands on, he said, intent on seeing some unfriendly neighbors confronted by unwanted porch visitors.

Meanwhile, he joked, the Quakers were silent on the carnival issue "but embarrassed when they saw each other there."

Timing was everything, Gulley assured, noting that hitting three ducks in the shooting gallery would earn a boy a bullwhip, while missing one would result in the lesser prize of a wild-haired plastic troll.

"By the end of carnival week," he said, "Peanut and I had quite a collection of trolls."

But had he hit that third duck, Gulley said he wouldn't have been a target for a 16-year-old bully with a rap sheet as long as his arm, who after spotting Gulley toting around those trolls, called him a "wussy" and beat him up.

The rides were another thing, he said, with his mother disparaging both the operators and the apparatus in an attempt to keep him off such attractions.

"According to my mother," Gulley joked, "the only children on those rides were those whose parents didn't love them."