As a young boy, he and his family relocated to Superior, Ariz., due to his father's health.

John graduated from Superior High School and soon after joined the ranks of the U.S. Army. He served a tour in Vietnam as a door gunner on a helicopter. In total, John served more than 32 years with the U.S. military. He was affiliated with the SeaBees, U.S. Army and the Army Reserves. He achieved the rank of master sergeant. 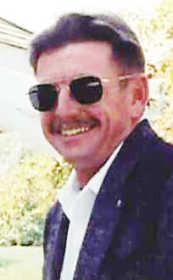 During those years of service he worked in Alaska, Idaho and California. He worked on construction of pipelines, bridges and many other projects. One of the last positions he held with the military was at Camp Atterbury, training troops prior to deployment to the Middle East.

He also always worked his own construction projects as time allowed. He worked for the City of Brazil from 1992-2002 as the building inspector and with the water department.

John was a member of the Masonic Lodge 529 and a 32nd-degree Mason, Scottish Rite in Idaho. He was active on the 4-H Council Board and helped with the construction of the fairgrounds.

John has enjoyed watching NASCAR, and attended the National Drag Car races in Indianapolis many years. He was an Indianapolis Colts fan and has a Harley Davidson restoration project.

On Dec. 28, 1988, John was united in marriage to Mary Pell Ray. Together they have made their life together on the "home place" and have enjoyed their years together.

Visitation will be Sunday from 4-8 p.m. and again Monday one hour prior to services.

If friends so desire, donations may be made in his memory to the Clay County 4-H Fairgrounds with envelopes available at the funeral home.