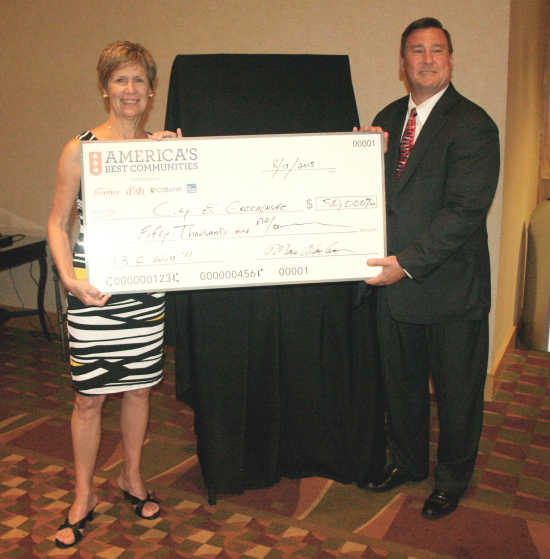 Banner Graphic/ERIC BERNSEE
Greencastle Mayor Sue Murray and Marc Evans, Frontier Communications regional general manager for Southern Indiana, display the lottery-size $50,000 check Thursday night that the city is receiving as a quarterfinalist in the America's Best Communities competition that will conclude in April 2017.
Order this photo

Now a quarterfinalist in a contest city officials weren't exactly excited about entering, the City of Greencastle cashed in with a $50,000 check Thursday night.

Celebrating as guests of Frontier Communications at a dinner at the Inn at DePauw, Greencastle is one of 50 communities named quarterfinalists in the America's Best Communities competition, a $10 million initiative designed to stimulate economic revitalization in small towns and cities.

Applications for the contest came due in the midst of the city already dealing with the logistics of the Stellar Communities grant that contributed more than $19 million into Greencastle restoration projects over the past four years.

"Really, we still haven't put a ribbon on the last one," Mayor Sue Murray said Thursday night, explaining that while the contest was filled with opportunity, it meant a challenge and "created a lot of angst" initially among a limited city staff.

But the possibility of the greater good won out and completion of the application process ensued.

"We have done so many incredible things," Mayor Murray said. "But what we haven't done is start pumping the blood through the bones of the skeletal system."

She said the America's Best Communities effort presents an opportunity to address things like enhancing the arts in the community and the schools as well as creating lifelong learning possibilities.

The opportunity, she said, is there to create "something to make people say, 'Yes, I want to live there.'"

She suggested talking to as many people as possible about "what would make this a community that you would never want to leave?"

Or one where companies would desire to locate and people from the university might choose to make their hometown.

The Greencastle application team -- which includes Mayor Murray, Jeff Hubble, Mark McCoy, Beth Benedix, Bill Dory, Andy Frazier and Leah Henry -- has decided to focus on the Castle Program, which enhances the elementary and middle school curriculum for teachers, particularly relative to the arts, and to encourage efforts aimed at lifelong learning by bringing community and university together.

The latter issue, she said, spawned the term "communiversity," coined by Mark McCoy, dean of the DePauw School of Music.

The community has been awarded $50,000 to develop a comprehensive strategy to accelerate the revival of the local economy and improve quality of life, according to Marc Evans, Frontier regional general manager for Southern Indiana.

The mayor called it an "amazing opportunity for those of us (i.e., small towns) who are not an entitlement community."

Frontier Communications, DISH Network, The Weather Channel and CoBank -- the contest's sponsors -- selected Greencastle as a quarterfinalist from a pool of about 140 applicant teams representing 350 communities. The 50 quarterfinalists now have six months to complete a revitalization plan for a chance to earn up to an additional $3 million to bring their ideas to life.

"Greencastle has always been a vibrant, strong community," Evans said, calling it a thrill for the city "to earn this recognition on a national stage."

"Strong communities don't just happen," he assured, noting they are most often the result of hardworking people with a dedicated plan of action.

Fifteen semifinalists will be selected in early 2016 to attend an America's Best Communities summit to present their strategies. Eight finalists then will be awarded another $100,000 to continue implementation of their plans.

America's Best Communities will name its three competition winners in April 2017. The winning community will get $3 million, with $2 million for second place and $1 million for third.